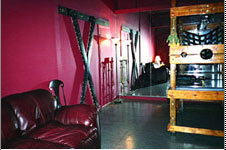 Six employees at a Manhattan S&M club were arrested this week and arraigned on misdemeanor prostitution charges yesterday. The women were busted for offering more than the standard whips, chains, and ropes that other dungeons offer. The six women, ranging in age from 19 to 39, allegedly offered to extend their services to full sexual intercourse for an additional $220. That's when undercover cops had to say the safety word, "Busted." Presumably, they weren't trussed up with ballgags in their mouths at the time.

All of the arrestees worked at Rebecca's Hidden Chamber, which was only semi-concealed on West 31st St. in Manhattan. RHC advertises itself as the Polite Dungeon on its website, which has been mostly taken off line. The establishment was not open for business yesterday afternoon, according to the Post.

In February, a Canadian man almost asphyxiated while left alone in a room at The Nutcracker Suite on East 33rd St. The Post seems to have a fetish for these stories, as they somehow managed to extract an interview from the very man whose identity they spilled in its pages.