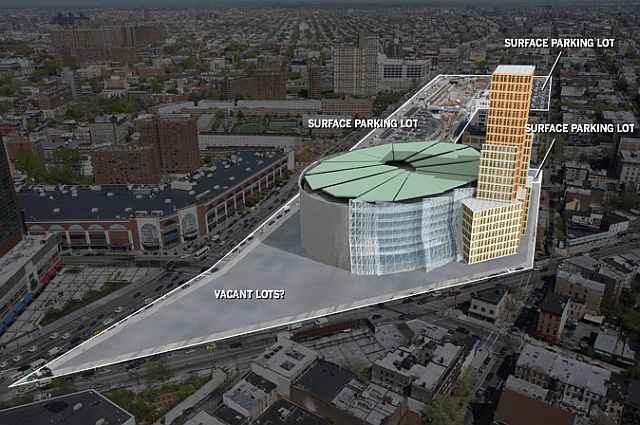 As a counterpoint to the new renderings of Frank Gehry's redesign for the Atlantic Yards flagship tower, here's a different perspective on the project's future look. The Municipal Art Society [MAS] has assembled a compelling slideshow that serves as a sort of dystopian crystal ball, depicting what could come come if Bruce Ratner moves forward with his development on 22-acres of land in Prospect Heights, Brooklyn.

The MAS renderings take as a starting point Ratner’s recent admission that the economic downturn will stall most of the proposed construction for the time being. But since he still intends to raze everything in the project’s footprint and break ground on the stadium and one building, the MAS slideshow envisions a desolate expanse of vacant lots surrounding a lonely arena for decades to come.

Ratner “anticipates” that the entire project – which would feature 16 buildings for commercial, residential and retail – will be complete by 2018, but MAS notes that these large scale projects rarely turn out according to the initial plans.