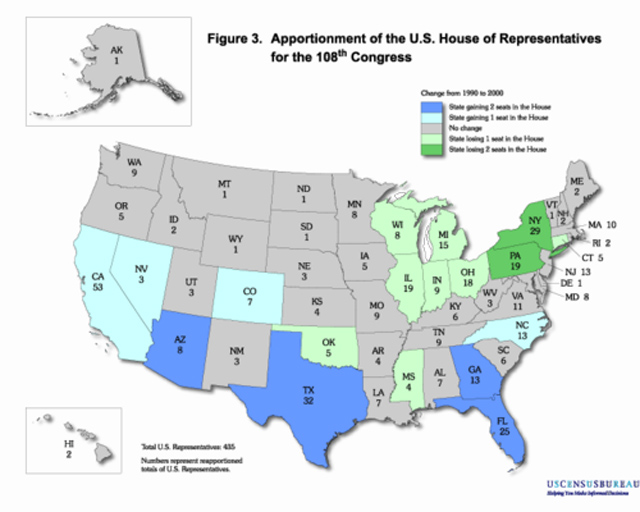 While the United States' population grew almost 1% this year and is expected to top 303 million people at the end of 2007, New York State's population grew at less than one-tenth the rate, increasing only .08%. States in the Sunbelt, like Florida, Nevada, Arizona, and Texas, experienced much faster population growth.

A negative byproduct of the disparities between New York and the rest of the country is that after every Census, Congressional seats are reapportioned based on population. Each state will always have two Senators, but New York is likely to lose at least one seat in the House of Representatives.

After the 2000 Census, New York lost two seats to bring our number of Representatives to the current 29. The New York Times points to a Queens College study of population trends that predicts that New York will lose another two seats after the 2010 Census, as Texas could pick up four seats and Florida two seats. There's also a link to the House of Representative's Apportionment page, which shows that New York reached its pinnacle of seats in 1930, when it held 45 out of 435.

Any decrease may wind up costing New York important committee assignments and ultimately federal dollars. Another thing to consider is that each state's number of electoral votes, which determine presidential elections, is linked to the number of members of Congress a state has.