Be very careful out there everybody: freezing rain and black ice have led to multiple car accidents around the city and tri-state area. Accidents at several major bridges, including the Grand Central Parkway in Queens and the New England Thruway in The Bronx, have caused partial closures and massive delays. The National Weather Service has placed the city under a freezing rain advisory until at least 11 a.m.

Here's the latest updates regarding the freezing rain. See below. pic.twitter.com/I2tov6zv2w

Icing on NYC roadways/sidewalks today. Many car accidents in #UWS & around the City. Please use EXTREME Caution. If possible, don't drive.

Traffic alert: all #statenisland bridges are closed due to icing conditions. pic.twitter.com/ulkTDTzCGX

Here's a listing of all the closures and major delays right now:

There have also been numerous car accidents reported on the Palisades Parkway, the New Jersey Turnpike, the Bruckner Expressway, the Cross Bronx Expressway, and the Taconic Parkway. At least a dozen cars were involved in a crash on the Cross County Parkway. Judging by all the red lines below, Westchester is looking particularly messy this morning. 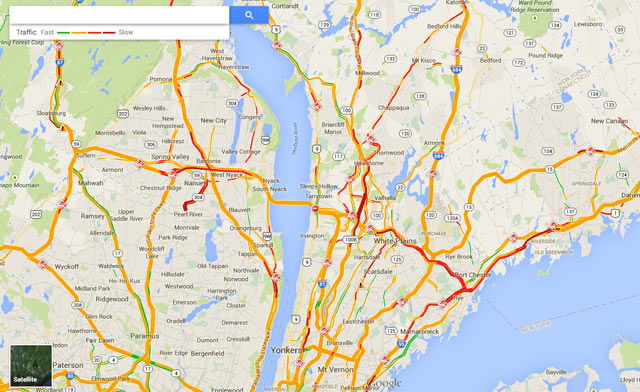 There have also been road closures on parts of the Saw Mill Parkway, Cross Bronx Expressway, and Palisades Parkway due to the slick conditions.

The Goethals Bridge, Bayonne Bridge, and Outer Bridge, are closed in both directions.

Here are more reports and photos from around the area:

@bkheightsblog Sidewalks in BK Heights covered with black ice. Be careful! Dog barked at people sliding - thought they were skateboarding.

I saw 2 car accidents happen walking Buddy a block from the studio in Northport. Long Island is EXTREMELY dangerous RN. Ice covers all.

ALERT NYC: Use extreme caution while Walking driving or any other outdoor activities due to very icy roads. pic.twitter.com/aUs2Xu2RVL

TRAFFIC PILE-UP! I-76 blocked in BOTH directions at Gulph Mills Rd. Hearing ice is a major problem on roads @6abc pic.twitter.com/AMlC6TIuXB

And we have a possible name for today's chaos:

#black ice
#ICE
#road conditions
#weather
#original
Do you know the scoop? Comment below or Send us a Tip