Last night, hundreds—possibly thousands—of Hasids turned out to mourn Menacham Stark, the 39-year-old Williamsburg real estate developer whose burned body was found in a Long Island dumpster. It's believed that Stark had financial problems and made many enemies in recent years. 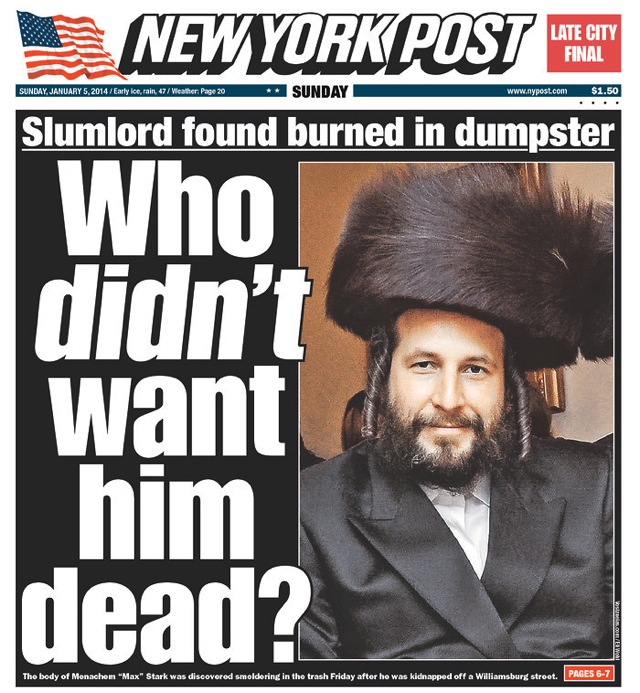 Stark, 39, the father of seven children, was kidnapped on Thursday night, with surveillance footage showing two men struggling with Stark and then forcing him into a Dodge Caravan. He was reported missing on Friday and his family offered a $100,000 reward for his return, but it turns out that Stark was probably already dead.

Gas station attendants at a Great Neck, Long Island Getty found a charred body in a dumpster on Friday morning. According to Newsday, "Fernando Cerff, who owns the Getty station where the body was found, said he and his workers were plowing snow Friday morning when they saw smoke rising from the steel trash container outside. That was initially disregarded as a possible burning cigarette. Workers tossed snow into the bin to extinguish it, Cerff said." However, a "horrible" smell led them to contact the police, who found Stark's body under a few inches of snow.

The body was confirmed as Stark's on Saturday, and by night, the funeral arrangements were made for his burial. While Stark was described as "family man, generous, nice" by friends and community members, investigators told the NY Post, "Any number of people wanted to kill this guy" and "He owed a lot of people money."

Stark left behind a trail of angry tenants from more than a dozen residential properties, mostly in Greenpoint and Williamsburg, along with an untold number of unpaid contractors and angry business associates, investigators said.

Stark was also known as a neighborhood ATM machine — dispensing loans to those in need of quick cash, said a neighborhood source familiar with his business dealings. “He was involved in shady business deals, was known to carry around a lot of money and had a sealed arrest for forcible touching” in his past, one law-enforcement source told The Post.

The alleged victim was a young teen girl, said the source, declining to give further details.
“He’s a Hasidic Jew from Williamsburg, and we think he’s a scammer,” another investigator said of Stark, who had defaulted on more than $30 million in real-estate loans in recent years and owed tens of thousands in penalties for building violations.

, "Court records show that Mr. Stark and his business partner, Israel Perlmutter, were sued several times after defaulting on major loans. In 2009, they declared bankruptcy after defaulting on a $29 million loan for a Brooklyn property consisting of 74 rental units and two joining lots."

A police source told the Daily News, "We knew from (Friday) it could end this way. When you look at his business dealings, you see a lot of red flags. Obviously he had many enemies."

Reporter Jacob Kornblush Tweeted remarks from Satmar community activist Isaac Abraham, who was responding to allegations of Stark's unsavory reputation: "You want to know who's an example of a slumlord? just google NYC Housing Authority."

#kidnapping
#landlord
#menachem stark
#murder
#real estate
#williamsburg
Do you know the scoop? Comment below or Send us a Tip