It's a comforting fact of New York City life that space in Central Park will never be allocated for towering high rise condos, glass-walled TD Banks or the upscale, alcohol-slinging Denny's that have become commonplace in so much of the city. But according to some, the threat of development destroying the park is still very real—not of physical structures being built in the park, but the shadows that such structures will cast from the outside.

A panel of stakeholders congregated at the New York Public Library last night to discuss the potential effects of shadows cast by the forthcoming "Billionaire's Row," a set of seven sky-high luxury apartments that many park-goers fear will prematurely darken soccer games and picnics with their omnipresent icy shade.

Among the panelists were Warren St. John, who penned an editorial on the topic for the Times last month, as well as Gary Barnett, the president of Extell Development, the company behind the shimmering new One57, the website for which declares itself "the tallest residential property in Manhattan" at 90 stories and 1,000 feet tall. Judging by which guy earned the most applause, the 500-person auditorium appeared to be predominantly packed with uneasy NIMBYs. The event had its own dedicated hashtag, #cpsupertowers.

The issues, the panelists insisted, are complicated. Zoning regulations are outdated and lack transparency, but what would changing them entail? Should buildings have height restrictions, or is a building's height less problematic than its width, or moreover, the number of tall buildings densely packed into a group? San Francisco has a "Sunlight Ordinance," which requires review by the city planning department of any proposed structure over 40 measly feet. Should New York City have such an ordinance as well?

Barnett, dressed in a Jobsian black turtle neck and clenching a venti Starbucks Drink, didn't have answers to any of those questions, but he did have a prepared statement intended to tickle the palpable sense of Liberal Guilt that pervaded the room. Not only would the shadows be "slender" (Extell generously narrowed the dimensions of One57 to a svelte 102 feet, versus the 225 feet they could have exploited were they Actually Evil), but the buildings will be an economic engine, creating more than 1,000 permanent, high-paying jobs for New Yorkers and their families.

"Is the possible small, minute addition of shadows that do no harm a worthwhile tradeoff against our fellow New Yorkers' chance to build a better life? And for our city to grow and become greater?" Barnett asked from his turtleneck. "I think not. This is the wrong issue at the wrong time." 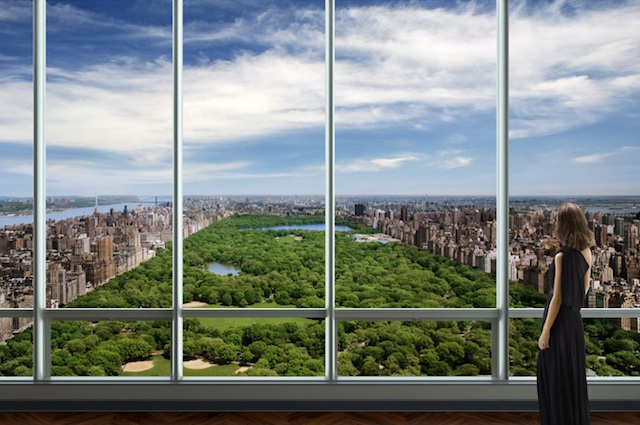 'I don't see any shadows, or poor people, from my 87th floor luxury pied-à-terre." (Extell)

Dissenters of the developments also argued that the towers would largely be occupied by foreign owners with little interest in the city—Russian oligarchs, Saudi oil barons—those types of people. "I think we need an oligarch tax on New York City," said State Senator Brad Hoylman, one of the panel's co-sponsors. "They're paying very little, and they're worth very, very much."

Barnett finds this argument prejudiced. New York City is a friendly place, he said, not just for the poor, but the rich and the mega rich.

"America has always been a very welcoming country—we want everyone to do well," he said. "We welcome the poor and the downtrodden, but we also welcome the wealthy, as well. There's nothing wrong with wanting to come here. There's no reason for us to knock other people."

There was a time, said St. John, a former reporter with the Times, when developers lobbied for curtailing Central Park at 72nd Street, using "economic benefit" as their argument. He said studies have shown the temperature difference caused by shadows could reach up to 20 degrees—what if we lowered the room temperature by that right now? The developments will do nothing to ease the city's housing crunch, and any economic gain is short term at best. He read a quote from the writer and activist Jane Jacobs, who referred to shadows as "a great eraser of human beings." He concluded by showing a photograph of his young daughter frolicking on the sunlit grass. The audience cooed, and nodded in agreement.