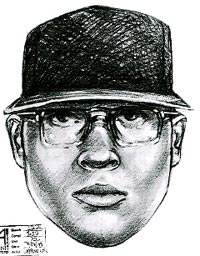 Police are still looking for the man who is suspected of killing a Brooklyn neighborhood's beloved dry cleaner. Kyung-Sook Woo, who worked 12-hour days at her Windsor Terrace store, was found in the store by a neighbor Friday morning and the police released a sketch of a suspect, a man who was seen in the area Thursday afternoon.

Police now think that Woo was strangled and that the killer used her car, a white Honda Accord, to get away. A deli worker down the street said Woo had mentioned a man spotted outside the store on Thursday; Brian Wince told WCBS 2, "She asked if I saw him and she said he was making her nervous."

Neighbors have been leaving flowers and notes outside the store; one said to the Daily News, "There were days I would just come by and talk and not bring in anything." Neighbors at Woo's Flushing apartment also left flowers. Woo's grieving sons told their father, who had to stop working at the store because of his health and is in a nursing home, "Mom is with Christ."

The suspect is described as being a black male, 5'7", "about 18 to 24 years old, wearing eyeglasses, a baseball cap, white shirt, black velour pants, a nylon jacket, and carrying a black knapsack." The car is a 2008 white Honda Accord, license plate EHS7392. Anyone with information should call CrimeStoppers 800-577-TIPS.

#brooklyn
#crime
#dry cleaner
#murde
#strangling
#suspect
#windsor terrace
Do you know the scoop? Comment below or Send us a Tip
A new Gothamist is coming! We’ve moved comments over to our beta site. Click here to join the conversation and get a preview of our new website.