Another high-ranking police officer has been reassigned in relation to the wide-ranging FBI probe into possible pay-for-favors relationships between prominent businessmen and NYPD brass, as well as their ties to Mayor Bill de Blasio.

Deputy Chief Andrew Capul has been reassigned from second-in-command of Patrol Borough Manhattan North to an administrative position, according to a police department announcement, making him the sixth to be demoted in relation to last week's revelation of the long-running federal investigation. The feds are reportedly looking into whether police took international trips, cash, diamonds, and other gifts from businessmen Jona Rechnitz and Jeremy Reichberg in exchange for favors including security details for social events and business deliveries, as well as whether their support of de Blasio's campaign crossed any legal lines.

Capul, according to the New York Post, was questioned by federal agents about a trip he took to the Super Bowl. In being reassigned, he joins Deputy Inspector James Grant, former commanding officer of the Upper East Side's 19th Precinct; Deputy Housing Chief Michael Harrington, a onetime underling of former Chief of Department Philip Banks, who is also being investigated; Brooklyn South Deputy Chief Eric Rodriguez; and Deputy Chief David Colon. Grant and Harrington were stripped of their guns and badges, as was a detective who pleaded the Fifth during a grand jury hearing. Some 20 high-ranking officers have been questioned in connection with the investigation, according to reports.

The NYPD has not responded to questions about whether those officers with department-provided cars get to keep them under their new assignments.

Grant allegedly escorted Reichberg back from the airport following international diamond-buying trips and accepted diamonds as payment, and also allegedly took an envelope of cash at his Staten Island home. Banks, who quit the NYPD in 2014, took trips to Israel and the Dominican Republic with the businessmen and corrections union head Norman Seabrook, who is also being investigated for possibly investing union money with Rechnitz without his board's approval.

The Daily News reports that Reichberg, a powerful figure in Borough Park, Brooklyn, may also have used his police connections to squash two assault raps against his nephew, a purported member of a crew of toughs who called themselves Grouplech, Yiddish for "Forks," who two victims said attacked them in separate incidents and never faced repercussions.

Capul made headlines in 2010, when he was a deputy inspector and commanding officer of the 34th Precinct in Inwood, after a freelance journalist publicized his officers' downgrading of her sexual assault to a misdemeanor. Capul publicly apologized at a neighborhood meeting and was subsequently transferred to Manhattan North (violent crime was also up in his precinct at the time).

Capul wasn't the only officer reprimanded recently for whom a previous scandal failed to stop a career rise to the top echelon of the NYPD. Harrington was implicated in the alleged coverup of a 2008 incident where 10 rookie cops beat a taxi driver outside an Upper East Side bar, then arrested him.

As for the cash that Rechnitz, an Upper West Side developer, poured into Democratic campaigns including de Blasio's, so far de Blasio, state Senator Adriano Espaillat, and Councilman Mark Levine have said they would return money from him, though de Blasio has declined to give back the $40,000 Rechnitz bundled for his campaign or the $50,000 he gave to his nonprofit Campaign for One New York, which is now closing down. 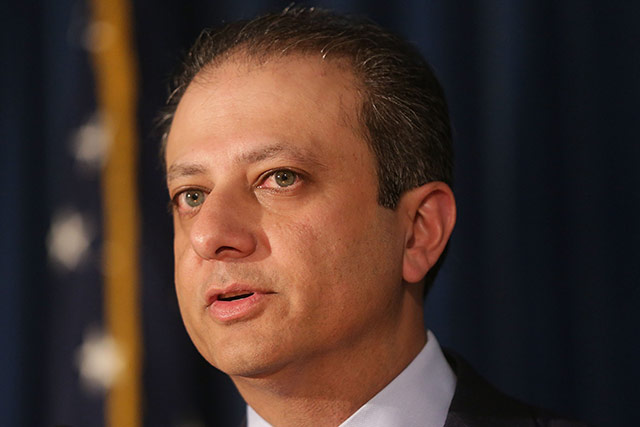 At a banquet for the good-government group Common Cause, U.S. Attorney Preet Bharara set hearts aflutter by saying that he is hard at work looking into de Blasio and Governor Andrew Cuomo.

Referring to his famous "stay tuned" directive after snaring kingfish Sheldon Silver in early 2015, Bharara said it would:

Instead, Bharara said, he had:

checked the local listings, and sadly I don’t see any of this programming. Instead what we have gotten a lot of reruns and, dare I say it, premature cancellations. Yes, that’s a reference to the Moreland Commission, which didn’t run for even one full season. We’ve gotten a lot of rhetoric, but not a lot of results; we’ve got a lot of promising, and a lot of under-delivery.