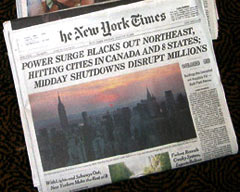 Six years ago today, parts of the Northeast, Midwest and Canada suddenly suffered a blackout. In New York City, the blackout occurred in the afternoon and after initial worries that it was terrorist-related, people just concentrated on figuring out how to get home—and how to survive without cell service, because most of the circuits were jammed up! And the city came together, with people helping direct traffic, throwing impromptu parties (thanks to restaurants who gave out food since it'd have to be thrown away anyway), being buddies during walks home and offering to let friends and co-workers crash at their place.

Power was eventually restored to the entire city by the next evening. While the blame for the blackout was initially placed on Canada, it turned out to be Ohio's fault—power lines there failed, setting into motion a cascade of power failures throughout a series of states. Here's a timeline from Wikipedia and for some wonky reading, here's the Federal Energy Regulatory Commission's various reports related to the blackout.

Kottke and The Morning News shared their 2003 blackout memories—what are yours? And this might be our favorite blackout fact: The city dumped 30 million gallons of "untreated human waste" into the East River because the Department of Environmental Protection's backup generators didn't work!