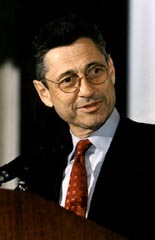 State Assembly Speaker Sheldon Silver made a public plea to Gov. Eliot Spitzer to cool down his feud with State Senate Leader Joseph Bruno. The so-called Troopergate scandal began when the Governor allegedly sicced State Police on Bruno to monitor his business travel practices. In the aftermath, Spitzer lost some of his long-time aides when he claimed he knew nothing about the surveillance and they resigned. Darren Dopp recently was hired as a lobbyist after losing his job.

Silver spoke out when it became public that the Governor may have also tried to convince the state senate minority leader to begin a federal IRS probe into Bruno's travel habits.

"I think everybody has to take a step back," Silver, Spitzer's most important legislative ally, told Albany's WROW-AM. "I think we all have to take . . . a little bit of the politics out of it . . . and think [about] what the people of the state really want us to do."

Spitzer recently hired a Manhattan law firm to defend himself from a Republican-controlled state senate investigation into the Troopergate matter. The law firm of Dietrich Snell will be paid for by taxpayers. Republicans want to hire their own former federal prosecutor at the rate of $500,000 for six months to investigate the Governor. New Yorkers get to pay for that too. There's no price too high on public integrity we suppose.