Signs of Life but No Sign of a Win for Jets 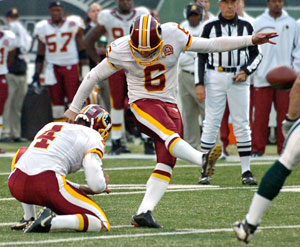 Even if a good portion of the announced paid attendance wasn't there to see it, the Jets played an entertaining if not successful football game in their 23-20 overtime loss to the Redskins on Sunday. Kellen Clemens showed flashes of brilliance and moments of poise -- including a drive that culminated with the game-tying field goal with 10 seconds left in regulation -- but the Jets defense didn't hold up its end of the bargain. A 17-3 lead, thanks in large part to Leon Washington's 86-yard touchdown return off the opening kickoff, didn't hold up. The Redskins' Clinton Portis, notorious for small workloads, carried the ball 36 times for 196 yards. Washington kicker Shaun Suisham's five field goals didn't help the Jets' cause either.

For Clemens and the Jets, the loss had some bright spots. They put together a respectable offensive showing without their best offensive playmaker, Laveranues Coles, who sat out the game with a concussion. They held their own facing a team playing a must-win game after a humiliating loss at New England last week. And Clemens looked like he could have a future in the NFL as a quarterback. He showed mobility, a strong arm and a knack for avoiding dumb decisions. Credit for the last part should also go to Coach Eric Mangini, whose gameplan didn't put too much on the player making his second career start. More good news for Jets fans? They won't lose next week. They're on a bye.