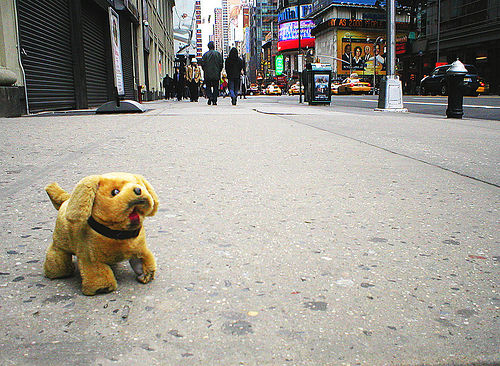 The city's shocking sidewalks strike again! An Upper West Side pup was electrocuted Thursday during a late night walk on 72nd and Amsterdam. This has happened too many times over the past few years, more recently to a NY Post reporter's dog in Marcus Garvey Park in Harlem, who died from the shock.

A few years ago when Jodie Lane died, and her two dogs were injured from a similar shock, Con Ed reported they had been getting "about 100 complaints about people or dogs receiving electric shocks from street equipment, but the reports have increased enormously in the two weeks since [Jodie Lane's] accident."

Buddy, the latest canine victim, was standing on the electrical plate when he received the shock and the DOT reported it as being "a control box for the traffic light...the insulation of one of the wires had come loose." Luckily Buddy is okay, but "his owner says he was still clearly uncomfortable walking by that spot." Con Ed fixed this particular electrical plate, even though it was part of the DOT's infrastructure.

Incidents like this are more common in the winter, when salt makes water on the ground conduct more electricity. So another friendly reminder: buy your pooch some boots! We suggest some rubber-soled ones, like these.

#animals
#con ed
#dogs
#dot
#harlem
#Jodie Lane
#late night
#Marcus Garvey Park
#news
#ny post
#people
#photos
#strike
#Times Square
#traffic
#Upper West
#Upper West Side
#west side
Do you know the scoop? Comment below or Send us a Tip
A new Gothamist is coming! We’ve moved comments over to our beta site. Click here to join the conversation and get a preview of our new website.