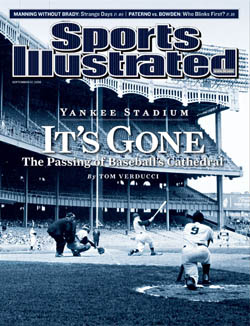 This week’s Sports Illustrated pays homage to The Stadium, The Cathedral In The Bronx, The House That Ruth Built. Tom Verducci, writing as Yankee Stadium itself, recounts some of the things that took place inside the stadium walls - a place that has seen so much history in its 85 years that it truly is an iconic location.

From the “Gipper Speech” uttered by Knute Rockne, to Lou Gehrig’s “Luckiest Man” speech. The first overtime game in NFL history was played in Yankee Stadium. The Pope has delivered mass there twice. The list of stars who played there is endless, from Ruth to Ted Williams, from Derek Jeter to Cal Ripken, Jr..

There have been magical nights that transcended sports. June 22nd, 1938, when over 70,000 people came to watch Joe Louis fight Max Schmeling. President Roosevelt told Louis, “We need those muscles to beat Germany” and Louis delivered. Or October 30th, 2001, when a grieving nation and a grieving city joined together to celebrate America and try and move on from tragedy.

Of course baseball moments will be remembered the most. Boone’s home run, Maris’ 61st, August 6th, 1979, Larsen’s perfect game, Reggie’s three home runs, Mantle hitting the façade and yes, even the bloody sock. So much history and so many memories, it makes you wonder why they have to tear it down in the first place? Oh yes, the quest for more money.