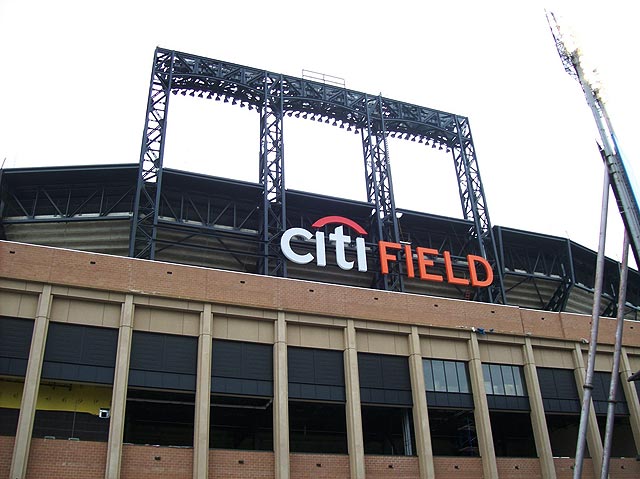 Perhaps inspired by yesterday's NY Post cartoon by Delonas, featuring Mr. Met watch CitField's name changed to Taxpayer Bailout Field, two politicians from State Island are proposing that Citifield be named Citi/Taxpayer Field. Because what better way than to pay tribute to Citigroup's $400 million investment in the Mets' new home, now that taxpayers are on the hook for about $350 billion with the Citi bailout.

City Councilman Vincent Ignizio (R) said, "Perhaps a name change is in order, since it will be the taxpayers of the country who will foot the bill for not only part of stadium, but for the company itself. The taxpayers are spending billions for this company to maintain its operations and deserve the recognition for their largess.” And City Councilman James Oddo (R) added, “Not naming the field after Jackie Robinson in the first place: mindless. Tom Seaver stepping onto the new mound for the first time: timeless. Actually acknowledging the contributions of the hardworking taxpayer: priceless.”

Newsday's Wallace Stevens has a column about this tempest in a name: "The one thing it should not be called, under any circumstances, is Citi Field." And still, on the Mets' website, there's an article noting, that while the CitiField name is not in jeopardy, "they understand a takeover is possible and that a name change probably would follow. As much as the club favors the current name -- it considers it far less corporate-sounding than most of the new names for stadiums and sports arenas, it is much more conscious of the revenue connected to it."

#bailout
#baseball
#CitiFields
#citigroup
#mets
#taxpayer
Do you know the scoop? Comment below or Send us a Tip