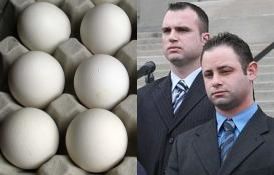 Two white Staten Island cops were indicted today for an incident last Halloween in which they allegedly handcuffed a black egg-throwing teen and drove him to a dark, secluded marshland he was stranded (the handcuffs were taken off). Initially, the cops were also accused of stripping him down to his shorts and kicking him.

The officers, Thomas Elliassen and Richard Danese, who are pleading not guilty, said they just wanted to "scare him" and later drove back to find the teen, Rayshawn Moreno, but he had run to a Burlington Coat Factory mall in the distance. Moreno apparently took off his clothes to avoid detection when running from the marsh.

Now the 14-year-old’s attorney is displeased with the 33 count indictment and says the cops should have been with kidnapping. He also says the grand jury should have been given the opportunity to declare it a hate crime. Before leaving Moreno behind on Halloween, one of the officers allegedly said, "We know you and all your little [N-word] friends talk about how you don't like us. We don't like you either." The officers also a href="http://www.nytimes.com/2008/03/04/nyregion/04staten.html?ref=nyregion">allegedly threatened to beat him.

Officer Danese is in more hot water: He now stands accused of using a sergeant's computer and log-in information to try to dig up dirt on Moreno and his father, James Hazel. Danese is charged with an additional felony, “computer trespass” punishable with up to four years in prison, and is suspended without pay. Both officers also face a maximum of four years for the top count of unlawful imprisonment. Moreno was never charged for the egg tossing, and he insists he was just throwing them at his friends.

Photograph of Danese and Elliassen from the Staten Island Advance