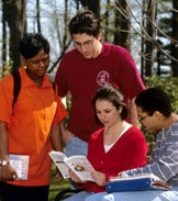 During a time when most college students are looking forward to another school years, the ones at the College of Staten Island were a bit alarmed. See, a few days ago, CSI sent a letter to students explaining that 41-year-old Annadale resident and former state trooper Thomas Austin would be studying with them. And that Austin was a Level 3 (the highest) sex offender. Welcome back to school.

Naturally, students and other faculty became very concerned. Austin was imprisoned after taking pornographic pictures of a 7-year-old in 1997 and then jailed again after trying to get a 14-year-old to take "lewd" pictures of herself over the Internet in 2004. Austin was paroled and had been living with his parents when he enrolled at CSI. CSI has a public school and day care center on campus, but officials decided that telling him he couldn't have contact with those students was enough.