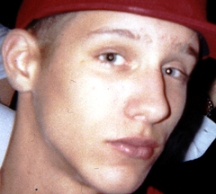 Eighteen-year-old Steven Molinaro, grandson of Staten Island Borough President James Molinaro, was found guilty of criminal contempt of violating an order of protection. His family says that the jury made a bad decision and James Molinaro said, "I think being my grandson hurt him."

Maybe so, but Steven Molinaro has been getting into trouble on his own. Last year, Steven Molinaro was arrested after beating up a 14-year-old Staten Island Advance newspaper boy Mark Veras, who had been teaching a 15-year-old girl how to take over the route; Molinaro and a friend beat up Veras, who had a brain contusion and needs 10 stitches. And in spite of prior incidents, including stabbing a 14-year-old, Molinaro managed to escape jail time.

He was told not to harass Veras, but earlier this year Veras and his mother said that Molinaro was in a car that drove by their home. Molinaro's lawyers claim that Molinaro was at the Young Adult Borough Center during the alleged drive-by (the assistant principal and teacher backed up that claim) and that the car in question was actually in the shop. Additionally, the prosecutor's evidence could have been a little shaky. From the Advance:

In addition, Veras and [his mother] Mrs. Barbosa -- who are suing Steven and Cheryl Molinaro for $1 million -- gave conflicting accounts of the incident.

Veras said his mother was home at "4, 4:10 [p.m.] -- on the couch watching TV with my stepfather," while he prepared for the first half of his paper route.

Following her son on the stand, Mrs. Barbosa recalled being on a bus on her way home from her job in Manhattan crossing the Verrazano-Narrows Bridge when she noticed the time on her cell phone was 4:38 p.m.

She claimed she arrived home at 4:45 p.m. and was helping her son about 15 minutes later when he shouted, "Look, Ma, it's Steve."

Cell phone records showed that Mrs. Barbosa called her attorney from her cell phone at 4:56 p.m., three minutes before she received a call from her home phone. Noting that a bus schedule specified an arrival time near Florida Avenue at 4:59 p.m., [Molinaro's lawyer Joseph] Sorrentino submitted that Mrs. Barbosa was actually on the bus and could not have seen Molinaro if indeed he passed by her home at 5 p.m.

At any rate, the jury found Molinaro guilty and he faces a minimum of five years.

The prosecutor, Peter Hinckley, is from the Manhattan DA's office, because there were concerns that SI Beep Molinaro's political connections would affect the case. The Advance reports that Hinckley "gave a slight victorious pump of the fist."