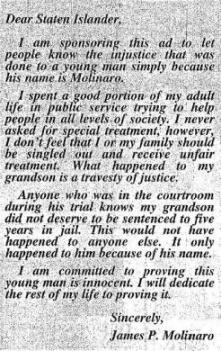 In 2006, Steven was arrested for beating up a 14-year-old Staten Island Advance paper boy and, this year, Molinaro was accused of violating an order of protection and driving down the paper boy's street. D.A. Donovan took himself off the case, because he was once Molinaro's deputy borough president, and the Manhattan D.A's office prosecuted the young Molinaro.

In spite of some questionable evidence, the jury found Molinaro guilty of criminal contempt. When sentencing the young man to the maximum, the judge said, "You have been given every opportunity to escape prison in this case.... It's your actions that have brought us to where we are today, not anything anyone else has done."

Molinaro's advertisement includes the following phrases, per the Advance:

...[the sentence was] a miscarriage of justice that began when Donovan abdicated his responsibility and sent out the case...

...Because of District Attorney Donovan's concerns about the 'appearance of impropriety,' dozens of other defendants face the same fate. Appearances, it seems, can be deceiving. And deny equal justice under the law. And produce a miscarriage of justice...

The ad also mentioned how the Manhattan prosecutor pointed at and mentioned Borough President Molinaro.

Donovan, who faces re-election, issued a statement saying, "As District Attorney I have both legal and ethical obligations to bring to the attention of the Court any actual or apparent conflict of interest concerning cases that come before me."

Steven Molinaro's lawyers are going forward with an appeal. And Ron Kuby and Curtis Sliwa discussed the ad during their radio show; Sliwa suggested, "Why didn't he just eliminate all those words and just say, 'Donovan, I thought you were my friend. You were my deputy borough president. You should have thrown the case in the direction of my [grandson].'"