Should You Tip Your Uber Driver?

I spend a fair amount of time in Los Angeles, and when I'm there I rely heavily on Uber, as I'm usually without a car and that city isn't exactly known for its public transportation. A year ago, I was in Venice and an Uber driver told me I had a low rating of 4.8 (out of 5!)—he explained that if I got down to a 4.5, that Uber would delete my account. Well, that sure didn't seem accurate! And it wasn't. This was simply his way of steering the conversation towards tipping, and how tips would help me get a higher rating, and to tip him, please, "$2 would be fine," he said.

At the time, Uber had just started giving passengers the ability to find out their rating. Just as you rate your driver (1 to 5 stars), s/he rates you. Gothamist publisher Jake Dobkin argues this is a system of oppressive control (in Soviet Russia, cabs rate you! Etc.). But it's really just meaningless, like playing a game of Candy Crush on your phone, pressing a star isn't really doing anything. Because unless you're a total dick giving out 1-star ratings for no real reason, your rating is probably in the 4s, and it won't have any effect on your using Uber. (If your rating is significantly low, however, this can effect how many drivers will actually pick you up.)

My 4.8 rating last year has since gone down, a couple of times. This seems to happen after every trip to Los Angeles, where I have now learned that tipping is more standard. At first I went down to a 4.6, and the last time I requested my rating (which you can do via the app), I was told by a cheery Uber rep name Roderick that: "It is 4.4. Great!" Is that really "great," Roderick? Even though it doesn't really mean anything in relation to using the service, the 4.4 Uber rating was making me feel guilty for not tipping. That's probably a good thing. 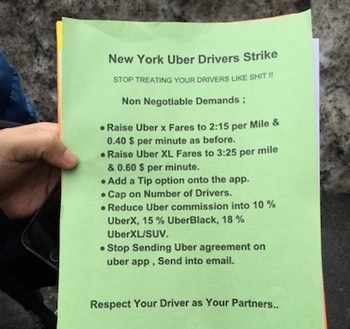 "Add a tip option onto the app." (Gothamist)

I reached out to Uber to make sure their most current tipping policy hadn't changed, and to find out how much drivers got of the final fare. I was told that drivers are encouraged to remind passengers that tipping isn't necessary, however, if a passenger insists on tipping, the driver is free to accept it. The Uber spokesperson also told me that they try to make their experience "a cashless and seamless experience." Drivers, I was told, take home 75 to 80% of the fare.

But with fares being lowered, Uber drivers are taking a hit—at a recent protest, driver Dwayne Andrews explained, “It was good at the beginning, there was a base fare, not as many drivers. You were able to make a living and truly work at your own time. But now you have to do more trips for less money and every month they're putting out more and more drivers, further diluting the market. And now they’re dropping the prices?"

Uber needs to explicitly change their tipping policy—whereas Lyft encourages tipping, currently Uber still tells passengers not to tip... but why? When the service was first introduced it was more expensive, and offered up mostly black cars—at that time there was a pretty firm "no tipping" policy, and it made sense. The problem is this no tipping policy seems to have stuck even though the service has come more in line with the common cab. But you are tipping your cab driver, so why wouldn't you tip your Uber driver?

In fact, Uber has hidden away a feature where you can automatically tip your Uber Taxi driver. You can only activate the feature via signing up on your desktop, not on the app itself. Here's what to look for under the payment option online: 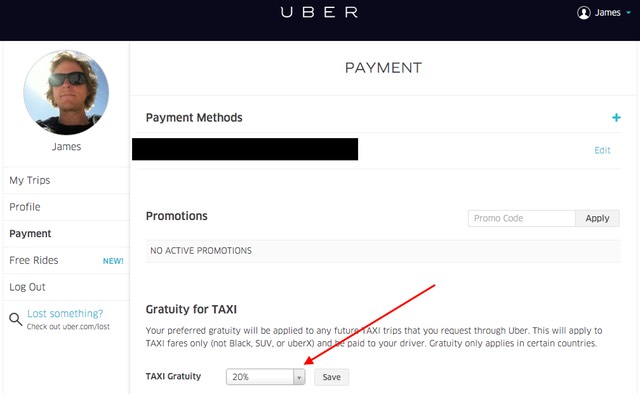 This is sort of pointless since with Uber Taxi you need to swipe your card at the end of the ride anyway (the Uber part comes in through a $2 fee for using the app to hail the cab). This feature would be helpful with the other Uber services, however, since the appeal is that you don't have to swipe anything or have cash on hand, since you pay directly via your app... but until this is introduced for those options, it's on you to do the right thing. Here are some simple rules I've created that everyone on earth should now follow:

#etiquette
#rating
#tipping
#uber
#original
Do you know the scoop? Comment below or Send us a Tip