Should The Statue Of Liberty Be On The New Jersey Quarter?

The Statue of Liberty as seen from New Jersey. (Photo by Steven Kelley)

New Jersey is angling to get Ellis Island and the Statue of Liberty on their new quarter, which will be issued in 2017. According to the NY Post, the U.S. Mint will be honoring national parks and monuments in the new roll-out, and Jersey has eyed Lady Liberty and her island as its representative.

Naturally, it's evoking outbursts like this one, from Rep. Peter King, of New York's 2nd Congressional District—King, as usual, is outraged, declaring that Jersey "really wants to be New York. They are always trying to imitate us. They live in our shadow, and now they are trying to make believe they are New York."

King is from Seaford, Long Island, which looks like a picturesque, quaint little town further outside of the 5 boroughs than parts of NJ. You can't see the Statue of Liberty from Seaford, like you can from the Garden State, and you also can't take a 15-minute train ride to Manhattan from there, like you can from Hoboken... a neighborhood more like Manhattan than Seaford. So get back in your corner Peter, you've got some thinkin' to do. 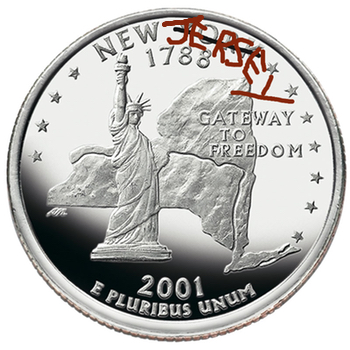 The people at Save Ellis Island have also chimed in, eager to get imprinted on a quarter—on Facebook they wrote:

"NJ doesn't want the Statue of Liberty, the Statue belongs to all Americans, not just to NY. However, if NJ wants a quarter to represent the state of NJ and has chosen Ellis Island, then let it be the NJ side of Ellis Island. We love, honor and respect the Statue of Liberty but Ellis Island is where your ancestors first stepped onto American soil. The Immigrant hospital, on the south side of Ellis Island and in NJ, is where they were compassionately treated by the doctors, nurses and staff of the largest and most advanced hospital at the time. It's totally unfair to say NJ wants to be NY."

The imagery of the Statue of Liberty on the NJ quarter would be a little problematic, however, not because "New Jersey wants to be New York," but because most people associate the statue with NYC, and it was already on New York's quarter in 2001, so if it went through there would be two versions circulating. Though the NY one did not include Ellis Island.

According to the Post, "Mint officials acknowledge that New Jersey’s choice of landmarks is challenging and said they are working with designers on an image 'evocative' of New Jersey and not New York." What if we give the Statue of Liberty... but with Bruce Springsteen's face? An instant collector's item!

#Ellis Island
#new jersey
#nj
#quarter
#statue of liberty
#us mint
Do you know the scoop? Comment below or Send us a Tip
A new Gothamist is coming! We’ve moved comments over to our beta site. Click here to join the conversation and get a preview of our new website.