Should the Nostalgia Train Make Money? 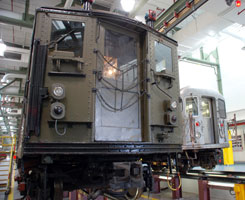 The Division of State Government Accountability from the Office of the New York State Comptroller recently released an audit of the New York City Transit Museum’s Nostalgia Train program. The audit identified “significant weaknesses in the Museum’s internal controls over ticket revenue for Nostalgia Train excursions” and that most of the program’s costs are coming from New York City Transit’s fare revenues and public mass transit funding.

What's fun is that the audit was spurred by an anonymous tipster:

An anonymous letter received by the Office of the State Comptroller included allegations that there were weaknesses in the Museum’s accounting practices and claimed that latecomers were allowed to purchase tickets on board the Nostalgia Train, instead of paying in advance, with no apparent controls over the resulting revenue. Our audit addressed these allegations.

Background: Occasionally, the old trains are brought out and run in normal service for special occasions, like the recent 75th anniversary of the A train, but usually the Nostalgia Train rides are a part of the Transit Museum’s offering of programs and listed with the tours the museum offers, and tend to be scheduled a few times per year. Tickets for the trains are $30, $25 for museum members, and $10 for children or around $5 or $10 more compared to the tours the museum offers.

The audit brought to light the lack of record keeping with the Nostalgia Train ticket sales. Among the problems noted was a lack of receipt keeping, in accurate sales information, credit card information being kept in unsecured areas, and on one occasion a discrepancy between the revenue collected and money deposited in the bank. The MTA has started to address the concerns of this portion of the audit by changing some of the procedures for ticket sales and record keeping along with reviewing its policies.

Since the audit includes the MTA's replies to the Comptroller's office, you can read things like how the MTA notes the Nostalgia Train fleet does not “easily fit the traditional revenue vs. expense model”, as the museum is a 501 (c)(3) non-profit so it has never been considered a “profit center”, and that the museum provides intangible benefits to the MTA and the public.

And also the MTA believes “there is a symbiotic relationship between NYCT and the Museum, with the Museum playing an instrumental role in helping NYCT make the vintage fleet available to the public through Nostalgia Train events. In turn, NYCT provides in-kind expertise and assistance to the Museum.”

As for the Nostalgia Train program, the MTA stated, “The vintage Fleet is part of the State’s heritage and while the fleet is physically maintained by New York City Transit, the museum provides the means for these important artifacts to be experienced and enjoyed by the public.”

We have been on a Nostalgia Train trip and, other than a bit long, it makes you appreciate the little things in the modern subway cars, like sound insulation, seats not made of woven material, and, perhaps most importantly, air conditioning. True, you’ll have to deal with the foamers who have the fleet number and entire history of every subway car that ever ran in the city on these trips, but that is a small price to pay to get an idea of how things were years ago. We recommend going on at least one of these just for that, since there aren’t many full sensory experiences of old New York left.

Now we do wonder how much money went into the audit. Surely there are better things for eight staff members from the Comptroller’s office to spend about a year looking into. But we guess getting an anonymous letter filled with allegations does need to be investigated.