Should NYC Tax Gramercy Park? Or Just Open The Gates To All?

In the Twilight Zone that is NYC property taxes, a single condo unit can sell for $50 million, yet the government values the entire building at $15 million. Homeowners in Staten Island pay three times more than homeowners in Park Slope, and condo owners in Coney Island have tax rates seven times higher than condo owners in Downtown Brooklyn.

New York’s astonishingly complicated, purposefully opaque, property tax system was created to ensure that the tax burdens of single-family homeowners would be shifted to renters and businesses.

The current law exists because a couple sued to have their property taxes raised—they felt the valuation of their Fire Island bungalow was too low, and unfair. They fought for seven years, and in 1975, a judge ruled that municipalities across the state weren’t taxing single family homes properly. After six years of stalling, “The legislature responded to the court decision by replacing the old law with one that allowed localities to largely keep doing what they were doing,” according to a report written by the Independent Budget Office in 2005.

Renters rarely see the property tax bills that their landlords pass on to them, and commercial landlords can pass tax increases on to their tenants. Homeowners, meanwhile, know exactly how much their property taxes are.

“That makes homeowners acutely aware of changes in property taxes. And it makes elected officials wary of angering homeowners, especially because they vote in comparatively large numbers,” the IBO report reads.

As a result, rental properties have an effective tax rate that is five times greater than single family homes, according to the Citizens Budget Commission. Almost two-thirds of the people living in New York City are renters, and three-quarters of renters are racial minorities.

“To me, one of the problems that’s most fundamental to the city’s property tax, is, even the people who are benefiting don’t know it. They think that they’re getting screwed too,” said Martha Stark, an NYU professor who served as Finance Department Commissioner under Mayor Michael Bloomberg.

“That to me underscores to me just how complicated the tax is, that you don’t even know that you’re benefiting. That’s a problem. At least you should be like, ‘Yeah I’m bad, I’m bad, I know it.’”

Stark is also the policy director for Tax Equity Now, a group of powerful real estate interests (the Durst Organization, Related, Two Trees) and civil rights groups (the Black Institute, the NAACP, LatinoJustice PRLDEF) that is currently suing the City and the State over the property tax system. 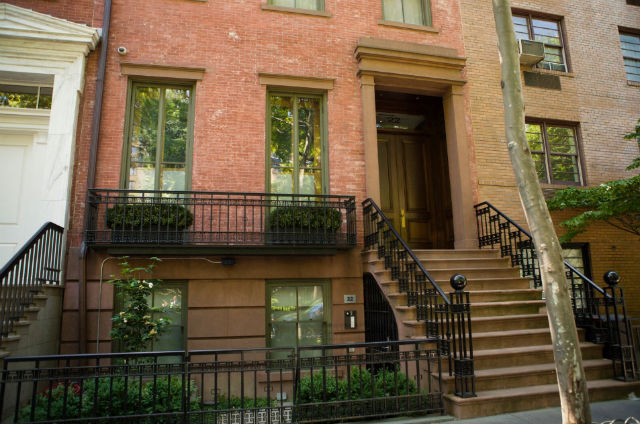 22 Gramercy Park has three total units, two of them sold together for $14.5 million a year ago. They are Class 1 condos, meaning that their tax rate is that of single-family homes, but they are still valued as rental property, as are all co-ops and condos. The Finance Department also does not designate these units as having access to Gramercy Park, despite the fact that they have access. Finance says this is because their data hasn't been updated. (Jessica Lehrman / Gothamist)

In this unjust universe of assessment caps and developer giveaways, pointing out that property owners with access to Gramercy Park may not be paying their fair share of property taxes is almost meaningless, says Peter Blond, a tax attorney who has represented clients in the neighborhood. After all, Madison Square Garden gets $50 million in tax breaks every year.

“There are many inequities [in the tax system] and to look at one in a vacuum is unfair itself,” he said. “Unless you’re gonna fix everything first, getting to the minutia seems kinda silly to me.”

James Parrott, the director of economic and fiscal policies at The New School’s Center For New York City Affairs, characterized that view as “whistling in the dark.”

“It’s true, there are a lot of inequities and the systemic inequities are far greater,” Parrott said. “But that doesn’t mean that this shouldn’t be revisited.”

Martha Stark agreed: “Is this too small? I mean, I wouldn’t call it that. I would say it’s one more example of some of the interesting inequities that exist in the system.”

“The question of whether or not the city would, on its own, say, well that was a 1910 decision, so we can do whatever we want, is unlikely,” Stark said, referring to the court ruling that forbid the City to tax Gramercy Park itself, because its value was proven to be captured in the tax assessments of the properties surrounding it. Stark added that in her tenure as Finance Commissioner (which ended with her resignation), the City challenged Cooper Union’s tax breaks and managed to claw back half of them. 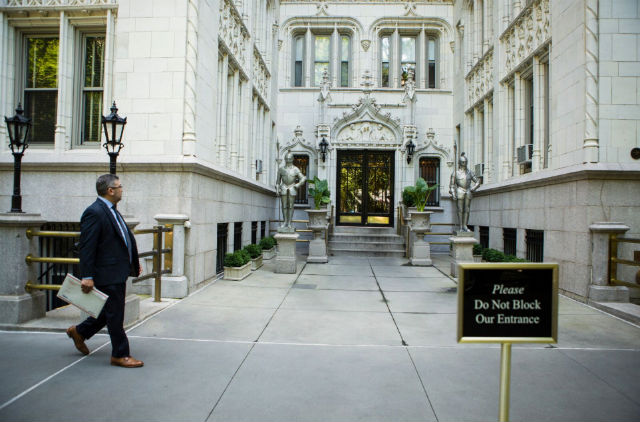 Condos at 36 Gramercy Park are valued as rental properties, due to current property tax law, meaning that they are severely undervalued. They too lack a designation from the Finance Department that reflects the value of having access to Gramercy Park (Jessica Lehrman / Gothamist)

The Finance Department told Gothamist/WNYC that it was impossible for them to say whether they were collecting the value of Gramercy Park in the property taxes of the buildings surrounding it, but that they were assessing them according to the letter of the law.

The law says that the value of the private park is reflected in the buildings that access it, and those property owners are supposedly assigned higher market values, and pay more in taxes to make up for the untaxed amenity. The idea that higher property taxes can pay for a public amenity isn't new: the City used the scheme, called "value capture," in the Hudson Yards project, and it's the rationale behind Mayor Bill de Blasio's Brooklyn-Queens Streetcar. But if this approach to Gramercy Park is no longer yielding appropriate tax revenue, or if it's too complicated to determine how much tax revenue is being collected, Stewart E. Sterk, the director of Cardozo Law School’s Center for Real Estate Law and Policy, said a more elegant solution exists: go back to taxing Gramercy Park itself.

“That seems perfectly reasonable to me, that’s the way to do it, rather than just assessing them because their own apartments are worth more,” Sterk said. “And if they don’t think it’s worth it, then they can all agree to sit down and get rid of Gramercy Park.”

The question then becomes, what is Gramercy Park worth as a vacant parcel of land that can be developed? In the 1890s, the City valued Gramercy Park at $100,000, or more than $2 million adjusted for inflation, and the Trustees agreed to pay the taxes on it because it was cheaper than litigation, according to court records obtained at the New York State Archives.

Joel Marcus, a tax attorney who recently secured a victory for the Rudin Management Company after the City attempted to tax the land they developed for NYC AIDS Memorial Park at St. Vincent’s Triangle in the West Village, insisted that the City “cannot tax [Gramercy Park].”

“There’s a very important Supreme Court decision that says the power to tax is the power to destroy; what you’re postulating, is destruction,” Marcus said.

“If you taxed that park, and you said this is gonna pay $10 million a year in real estate taxes, and you force this tax on the keyholders, the value of their homes will decline, by five or ten million dollars, because who would want to own something that has a percentage of tax?”

Marcus believes that “the City learned its lesson and Gramercy Park will never be taxed.” He added that “there are other examples that exist around the City, and fortunately I’ve obtained those tax exemptions, and I don’t wanna give you a list, because I don’t want Finance to go around and tax them.”

One property not on that list is the half-acre of private grassy land surrounded by 13 tony townhouses—including the $30 million home of Aristotle Onassis—on Sutton Place. The Finance Department assessed that land at $2.2 million, and tax records show that “Sutton Square Inc.” will pay $67,753 in real estate taxes for fiscal year 2019.

Sunnyside Gardens Park has been a private, untaxed park since 1926, but it serves a much larger group of homes than Gramercy Park, and hosts five public events every year, including Shakespeare in the Park.

Gramercy Park is open to the public for one hour on Christmas Eve. 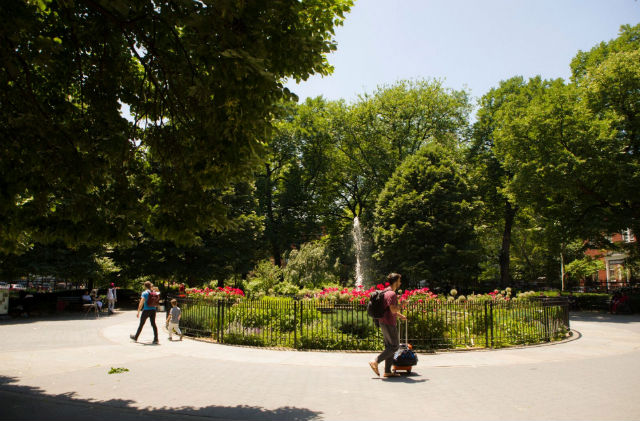 Arlene Harrison, one of Gramercy Park’s Trustees, and the founder and president of the Gramercy Park Block Association, did not respond to numerous emails and phone messages about this series.

When asked about our reporting last week, Mayor de Blasio told Brian Lehrer that the arrangement between Gramercy Park and the City “should be revisited.”

"The bottom line is, we can safely say that people in that neighborhood are doing very well, and the park access is a very unusual situation in this city. And it should be reassessed, it’s 2018," de Blasio said. "If it’s based on 100-plus year law of course we should reassess it and make sure that equity is governing our decisions and not a broken tradition."

Jeremy Unger, a spokesperson (and full disclosure, a former Gothamist intern) for Councilwoman Carlina Rivera, whose district includes Gramercy Park, said, “This analysis shows that our city’s confusing tax system must be re-examined for clarity and fairness. Councilwoman Rivera welcomes a discussion that includes stakeholders around Gramercy in order to assess this situation while recognizing the unique history of the park and the neighborhood.”

A spokesperson for the Mayor’s Office said that the mayor’s commission to offer recommendations to fix the property tax system is still settling on its first meeting date, which will take place this month. The commission is set to have ten public meetings before issuing its findings.

The Tax Equity Now lawsuit against the City and State is still winding its way through the court system.

On a recent Tuesday afternoon, Peter Salwen was painting in Stuyvesant Square Park, a public park a few blocks from Gramercy Park. An analysis of tax records over the past decade showed that property values and taxes per square foot weren't significantly higher for buildings on Gramercy compared to those sitting on the public park.

“The people who have keys to Gramercy Park are hated by all the rest of us because they have a private park," said Salwen. "Fuck ‘em you know? Why should they have such a thing these days?”

Salwen, who is a historian, added, "If it were a public park today, I’m sure it would be well taken care of and it’s a little hard to justify. But then property is property, and New York history, like they say, is real estate history.”

Timothy Sheares, deputy commissioner at the Department of Finance, invoked a similar explanation when asked why the City couldn't account for how much value taxpayers were getting from Gramercy Park.

“Legislation is as of its time, no one thinks about the future," Sheares said. “As we change and as legislation changes people forget about Gramercy Park.”

This is the third and final story in a series—you can read the other two parts of our investigation and the methodology behind the analysis.

#property taxes
#property tax reform
#Gramercy Park Trust
#Gramercy Park investigation
#department of finance
#original
#gramercy park
Do you know the scoop? Comment below or Send us a Tip
A new Gothamist is coming! We’ve moved comments over to our beta site. Click here to join the conversation and get a preview of our new website.