Should NYC Pay $32 Million To Put Body Cameras On Cops?

After Eric Garner's death exposed an illegal use of a chokehold by police, Police Commissioner Bill Brattton said he would retrain the entire department. Public Advocate Letitia James believes that isn't enough, and at a conference today in her offices she proposed a pilot program that would put body-worn cameras on 15% of the officers on patrol.

According to a report released by the Public Advocate's office, the cameras would cost between $450 and $900 apiece; the pilot program is projected to cost $5 million, while outfitting the entire department would cost $32 million.

"When you compare $152 million in judgements that we paid out last year compared to $32 million if we were to do this citywide, there would be some savings and obviously it would improve police-community relations," James said, referring to the money that taxpayers shelled out to pay NYPD-related tort claims in 2013 alone, which was less than previous years.

Under James's plan, the first officers to receive the cameras would come from precincts with the highest number of CCRB complaints. In 2013 that was the 75th and 73rd in East New York, the 79th in Bed-Stuy, the 40th and 44th in the Bronx, and the 120th in Staten Island, the precinct in which Eric Garner was killed.

The report notes that one in six police departments in America use body-worn cameras. In Rialto, California, complaints against the police dropped 88% and use of force complaints dropped by 59% after the cameras were instituted. Los Angeles, Cleveland, Detroit, and San Francisco are all experimenting with cameras. NYPD Commissioner Bill Bratton even told the Times last year that he would want cameras on his officers.

“Officers not familiar with the technology may see it as something harmful. But the irony is, officers actually tend to benefit," Bratton said. "Very often, the officer’s version of events is the accurate version.” 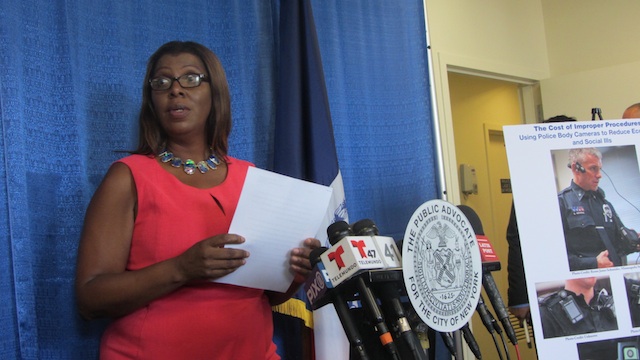 Last month, Mayor de Blasio called body cameras "a productive idea," and one that he was working on as part of the settlement of last year's stop and frisk case, in which a federal judge ordered a pilot program for the NYPD to test the technology.

“We do not know if and when that ruling will go into effect but we need action today and that is why I am proposing this initiative,” James said, adding that her program is more ambitious than the judge's, which only mandated cameras in a handful of precincts across the city that had issues with stop and frisk.

The Patrolmen's Benevolent Association, however, opposes the use of body cameras. "It is common knowledge that New York City is already saturated with video cameras," PBA president Patrick J. Lynch said last year. "Manhattan has its ring of steel. The outer boroughs have traffic cameras and countless private and public security cameras located everywhere so there is simply no need to equip patrol officers with body cams. Our members are already weighed down with equipment like escape hoods, mace, flashlights, memo books, asps, radio, handcuffs and the like. Additional equipment becomes an encumbrance and a safety issue for those carrying it."

Nevertheless, James pledges to push other elected officials to pass the plan by January of next year. "We’re going to continue to try and get some support from the city council, from speaker Melissa Viverito, and from others in the city of New York,” James said.

"Having officers wear body cameras serves several valuable and related purposes," Bob Gangi, director of the Police Reform Organizing Project, said in a statement. "To curb officers' objectionable practices and to hold them accountable when they abuse their authority; to protect officers from bogus charges....and, since both New Yorkers and officers will know that the cameras are recording their interactions, their encounters will more likely involve civil exchanges."

You can read the Public Advocate's full report below.

#body cameras
#CCRB
#eric garner
#letitia james
#police misconduct
#original
Do you know the scoop? Comment below or Send us a Tip