Should Bus Drivers Be Arrested For Failing To Yield?

After a 15-year-old girl was struck and severely injured by an MTA bus driver in Williamsburg on Friday, police arrested the driver, 58-year-old Francisco DeJesus, and charged him with a misdemeanor for failing to yield. The president of the transit workers union called the arrest "an absolute outrage," and three city councilmembers have drafted a bill to explicitly exempt MTA bus drivers from the law.

One of the bill's sponsors is Queens councilmember I. Daneek Miller, who drove a bus for 19 years and is a former officer in the transit workers union.

"If there is obvious negligence, if someone is texting, on the phone, drunk or using drugs, that is a totally different story," Miller says. "But for someone on a 40-foot bus, or sometimes an articulated 60-foot bus, with 50, 60, 100 passengers, with all sorts of things going on around, and people on cell-phones walking, and people on bicycles going in the wrong direction…These are the simple operations of your day-to-day."

Asked if injuries or deaths were an inevitability of operating a bus system in New York City, Miller responded, "I would hate to say that. I wouldn't go that far. But incidents occur."

DeJesus, who has 29 years on the job, is the second MTA bus driver to be charged under the Right of Way Law, which was passed in late August and carries penalties of up to $500 in fines and 30 days in jail. The first was 57-year-old Reginald Prescott, who struck and killed 78-year-old Jean Bonne-Annee in East Flatbush on December 23.

After Prescott's arrest, MTA bus drivers protested and briefly refused to leave their depots the next morning. Yesterday, TWU Local 100 president John Samuelsen released a statement to his drivers that explained how they should respond to the "ongoing misinterpretation and application" of the Right of Way Law:

Now we must respond appropriately, recognizing that we are being disgracefully and unfairly scapegoated and targeted.  It is imperative that we immediately move to defend our livelihoods and protect ourselves against these attacks. Therefore, we MUST Yield/Stop “when a pedestrian or bicyclist has the right of way.”  If there is a pedestrian in the crosswalk, Yield/Stop your bus until they are on the sidewalk. We must exercise extreme caution at intersections and on roadways.

Shouldn't bus drivers already be yielding or stopping "when a pedestrian or bicyclist has the right of way"?

"When I'm driving my bus down Fifth Avenue, two or three people are standing in the crosswalk waiting for the light to change before they cross, or I have delivery trucks, and the delivery guy's doing his thing and you know, I go around him. That's the normal course of action," says JP Patafio, the vice president of the TWU's TA Surface Department. "Is that the letter of the law? Doing what's supposed to be done? No, we're making the traffic flow, right? We're trying to keep the schedule." 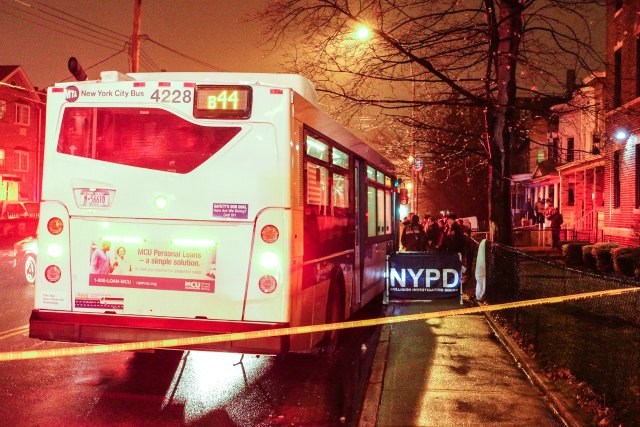 Patafio, who used to drive the B63 route, said that bus drivers already face suspensions, pay cuts, and possible termination from hitting pedestrians and cyclists, and that the law was unnecessary.

"Do I think we're above the law? No, but I think there should be some different considerations because of the nature of our job," Patafio said.

"You go into a hospital and the nurse or doctor gives you the wrong medication, right? It happens. It happens a lot. Does that doctor or nurse get arrested? Nurses don't get arrested because if nurses start getting arrested, we're going to have a real problem, because its part of the profession."

He added, "At the end of the day you're going to have accidents built into the job."

Over the weekend, the union's Twitter account sparred with safe streets advocates; at times, the argument seemed to be class-based.

"Tone deaf" is self-righteous brownstoners looking down at the people who drive 2 million+ NY'ers per day, @TheWeeklyNabe

There are already consequences for accidents @PSteely @Newyorkist. For you to call in a lynch mob screaming bloody murder is shameful.

"Transit workers are fundamentally working class," Patafio explained. "We're not policy wonks. That's just who we are. We know what we do and we try to do it better, and we just really try to go home. [The advocates] have no idea what they're talking about they have no idea what it means to be a bus driver in New York City."

"Something's not working, something's not right," White said. "If arresting one of their unyielding drivers is what it takes to get the union to place a priority on safety, then Vision Zero is working."

White added, "Looking at the statements from the union, we're very encouraged by what we're hearing, for the first time we're hearing a real vocal urgency around yielding to pedestrians and cyclists, and that's progress."

#bus drivers
#MTA
#pedestrian fatalities
#pedestrian safety
#right of way law
#vision zero
#original
Do you know the scoop? Comment below or Send us a Tip