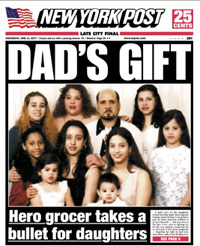 The police continued to look for the robbers who shot a Queens bodega owner in the face on Monday night. Bolivar Cruz, a Dominican immigrant, is still on life support; the Post reports that two of his seven daughters were working in store at the time and that Cruz tried to protect them. According to Police Commissioner Kelly, Cruz did take out a gun (unlicensed) but did not get a chance to fire it. It's unclear whether the robbers saw Cruz's gun. Cruz is not expected to survive.

The police revealed that the robbers may have been behind a series of Queens bodega robberies between March 17 and May 10, and picking up again Monday, in the neighborhoods of South Ozone Park, Springfield Gardens, Jamaica, St. Albans, Kew Gardens, Queens Village, Hollis and Richmond Hill. Sometimes they would rob many stores in one day - on Monday, police believed the group is behind an earlier robbery, perhaps trying to draw police attention to one location while another one is being robbed. Newsday writes, "News of the pattern -- which now numbers 17 robberies and includes one other shooting -- was not released until Tuesday, raising questions about why the NYPD did not notify the public, as it often does by alerting the media."

The other robberies were relatively free of violence: Two people were punched in the face and head while one worker was shot in the leg. Police have been interviewing suspects.