Short One Leg, But Goat is Long on Friends 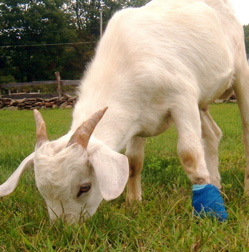 Albie the goat recently lost his leg to amputation, but an animal rights advocate who lost her own leg to illness is doing her best to ease the transition for a goat found in Brooklyn's Prospect Park. Albie was found in the park, after he probably escaped a Brooklyn slaughterhouse.

All four of his legs had sharp indentations, indicating he was probably trussed, as many animals are during transportation and the tight tying damaged Albie's left foreleg circulation. The goat's leg was eventually amputated and now he will be outfitted with a prosthetic limb.

TV producer turned animal rights activist Jenny Brown, who lost a leg to childhood cancer and now runs an upstate animal sanctuary, told the NY Times, “I’ve been an amputee for most of my life, but I can run a farm, I can wrestle animals, I can carry bales of hay, thanks to modern prosthetics. I thought it would be only fair to give Albie the same chance to live a normal life.”

One can meet the Woodstock Farm Animal Sanctuary residents and read their stories here. If one would like to donate to help care for the animals, here's a page at the farm sanctuary site. Other animals wind up at other farm sanctuaries, like Denny the goat.

#albie
#brooklyn
#farm sanctuary
#goat
#jenny brown
#prospect park
#prosthetics
#woodstock
Do you know the scoop? Comment below or Send us a Tip