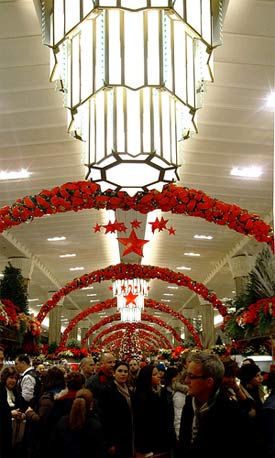 In the middle of the month, Macy's announced it would be keeping eight locations in New York and New Jersey open from 7AM on December 21th until December 24th at 6PM - for 83 hours straight! Macy's chairman and CEO Ron Klein had explained, "We are giving our customers extra time to shop when it’s convenient for them," and said that the success of the Queens Center mall location staying open last year encouraged Macy's to expand the extra-holiday-hours shopping this year.

Madness in the making or marketing brilliance? It's too early to tell - or for Macy's to reveal its holiday sales figures - but if NY Times reporter Manny Fernandez's foray into the depths of Macy's Herald Square at 3AM is any indication, it's probably a little of both.

Night owl shoppers, many of them people who work night shifts, were happy that Macy's was making this year's shopping easier. A surgical technician said, "Sometimes when you get out of work there is nothing open. Do you know how many times I’ve bought my wife birthday presents at Walgreens or Eckerd? It’s embarrassing. It’s either that or go to the Village, and what am I going to get, a bong?"

Some suggested that coffee be served to keep shoppers awake and aware, and maybe that's something Macy's can consider next year, given this episode:

Michele Harshall stood at a counter near the store’s Broadway entrance. Her husband had told her to wait there while he went shopping for her surprise gift. But there was another reason why she was in Macy’s at 4:15 a.m.

“We kind of had one too many drinks,” she said.

The Daily News says that Macy's is planning on marking down goods 20-50%, and many retailers are also offering low prices, to lure shoppers amid fears of lower sales numbers. Are any bargain hunters out there hitting the stores today, or is the fear of crowds too intimidating?

Oh, and the Queens Center Macy's has been open from 7AM on the December 20th until 6PM on the 24th - open for over 100 hours straight.

Photograph of Macy's Herald Square by djwerdna on Flickr