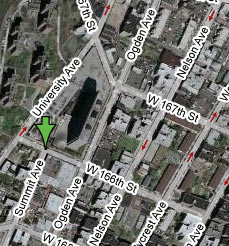 Yesterday afternoon, three people were injured when a gunman fired in a bodega near a public school in the Bronx. According to witnesses, the shooter chased two men from a nearby housing project into the Sun Shine Deli at West 166th and Summit Avenue. John Gregg told the Post he "walked up to the door and started shooting...Then he backed out and went around the corner. No words."

The victims included the two men the shooter was chasing and a 63-year-old woman in the store; another woman in the store - who had a baby - ducked from the gunfire. Down the street at PS 126, the Daily News reports there was a summer youth program being held: "security officers instructed the staff and children to stay indoors because of the gunplay."

Police are investigating whether the shooting was gang- or drug-related. The mother of one of the victims said, "They need to find whoever shot my son. He had to be crazy."