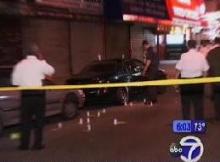 In just a few hours, there were five separate shootings all over Brooklyn last night and early this morning. The violence began at 10:20PM in Ditmas Park, when three people were shot at East 21st and Dorchester Road when a gunman opened fire on a man. The 25-year-old known as "Indian" died while a 23-year-old and a 50-year-old, who was shot inside his/her home, were both in stable condition.

The second shooting, according to WCBS 2, was at 12:13AM in East New York, when a man was shot in the leg at Bergen Street and Rockaway Avenue. Then, at 12:30AM, three people, including a 16-year-old, were shot in East Flatbush at East 91st and Clarkson; all were taken to a hospital.

At 1:30AM, a black car apparently pulled up on Franklin Avenue in Bedford-Stuyvesant, and shots were fired on a 25-year-old, who is now in stable condition, and a 33-year-old, who later died. The last shooting was at 2:30AM, when a 56-year-old man was shot at Newkirk and Flatbush Avenues.

All told, two died and eight people were left with injuries. Police are investigating to see if the shootings were related.