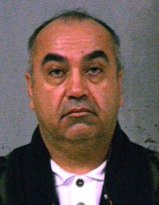 The family and friends of slain dentist Daniel Malakov yelled at murder suspect Mikhail Mallayev (pictured) in a Queens courtroom yesterday. Malakov was gunned down last year when he was dropping off his daughter to his ex-wife at a Queens playground. His brother yelled, "Hang him up!" as other yelled "Shoot him!" and "Take off his head!" when Mallayev left.

Malakov and his ex, Dr. Mazeltuv Borukhova, were embroiled in a bitter custody dispute over their daughter (Malakov was granted temporary custody). She denied having anything to do with the murder, but a State Senator testified in family court that Borukhova's sister asked the child would go if "something" happened to Malakov.

Police matched fingerprints from a homemade silencer left at the scene to those of Mallayev - a resident of Georgia and a relative by marriage of Borukhova. (How did the NYPD have Mallayev's prints? A 1994 fare beating arrest.) The Queens DA office revealed yesterday that Mallayev and Borukhova had exchanged 65 calls, including "one...placed from near the scene of the crime," leading up to killing. Mallayev claimed the calls were about medical problems, "I'm innocent. I didn't do this ugly thing." A medical problem that happened to be so close to the murder scene?

Mallayev was remanded without bail. Malakov's brother Gavril said, "I really think it's becoming more apparent it's [Borukhova] that hired him."