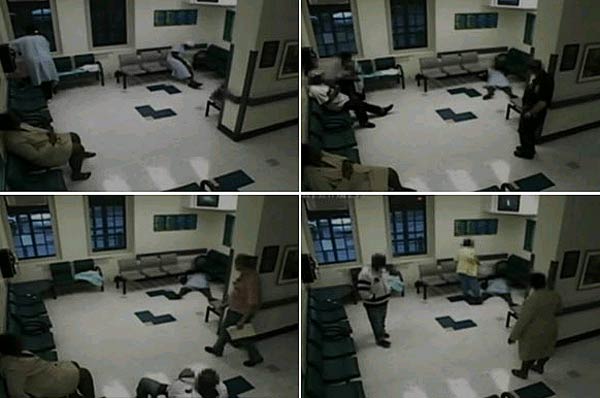 A distressing video was released showing a 49-year-old psychiatric patient left to die in the waiting room of Kings County Hospital. The video shows the woman, identified as Esmin Green, slump and fall to the ground--and two guards and a doctor look in and ignore her. Finally, a nurse comes to check on her, but not before kicking Green, who was dead at that point.

Attorney Robert Cohen told WNBC, "It's an emergency room, it's not a bus terminal. People who are in desperate need of services, care and attention come here to be treated and to get better. They don't come here to die alone." And the NYCLU's Donna Lieberman said, "Thank God for the videotape because no one would have believed this could have happened."

You can watch the video after the jump, but here's how it breaks down, per the Daily News:

Green, 49, taken to the unit for "agitation," keels over out of her chair at 5:32a.m., according to the time stamp on the video. She had been sitting about 3feet from an observation window. Two other patients were in the room.

Green is lying facedown on the floor, her legs splayed, when a security guard strolls by at 5:53 a.m., looks at her for about 20 seconds and then walks away.

She is writhing on the floor, thrashing her legs, about 6 a.m., when her medical chart contends she was "awake, up and about, went to the bathroom."

Green rolls on her back at 6:04a.m. She stops moving at 6:08 a.m., but two minutes later a security guard pushed his chair into camera view.

He never gets out of the chair, but looks at Green and scoots away. A female patient who was in and out of the room finally brings a clinic staffer to check the woman and a crash cart is summoned.

Green died on the morning of June 19--she had been brought to the ER almost 24 hours earlier. The guards and nurse have been suspended, and the doctor was fired.

Kings County, called "chamber of filth, decay, indifference and danger" in a previous lawsuit, is currently being investigated after other charges of neglect and abuse. And the hospital may have faked their reports about Green, saying Green was okay in order to cover up the death. The NYC Health and Hospitals Corp. said, "We are shocked and distressed by this situation"

Today show segment about the video:

#brooklyn
#emergency room
#horrible
#kings county hospital
#neglect
#patient neglect
Do you know the scoop? Comment below or Send us a Tip