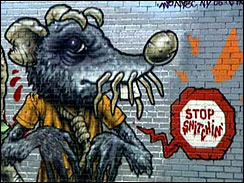 City Council Speaker Christine Quinn, Reverend Al Sharpton, and other community leaders gathered in East Harlem yesterday to paint over a mural (pictured) showing a rat with a noose around its neck and the slogan “Stop Snitching.” The phrase has become something of a mantra in recent years in high-crime neighborhoods, where speaking to the police is seen by some as treason that should be violently punished.

Sharpton said he was wearing his running suit for the first time in 20 years to paint and told reporters, “You cannot have mixed messages, you can’t say stand up if we’re discriminated against, that’s testifying, but if we do it to each other, that’s snitching. Crime is crime is no matter who the criminal, no matter who the victim.” But the mural had been painted on the building by Tats Cru – a group well known for memorializing victims of crime – with the permission of the previous owner. Donna Lieberman of the New York Civil Liberties Union objected to the city’s move to cover it up:

What we have here is an example of straight up censorship. It’s fine for community leaders to rally against this message, but in a society that values free speech, it’s unacceptable to compel anybody to remove a message from their property, simply because civic leaders object, no matter how tasteless that message is.

The building’s current owner had been informed that he could let the city paint it over or be fined. Council Speaker Quinn declared, "We are not going to stand for it. Anyplace you go with paint, we will follow you with paint." But local teens seemed unimpressed with the spectacle, according to the Times: “It’s not because it’s not cool to snitch,” said 14-year-old Stephanie Ballesteros. “People are afraid they might get killed, so they stay quiet.”

#harlem
#mural
#quinn
#sharpton
#stop snitching
Do you know the scoop? Comment below or Send us a Tip