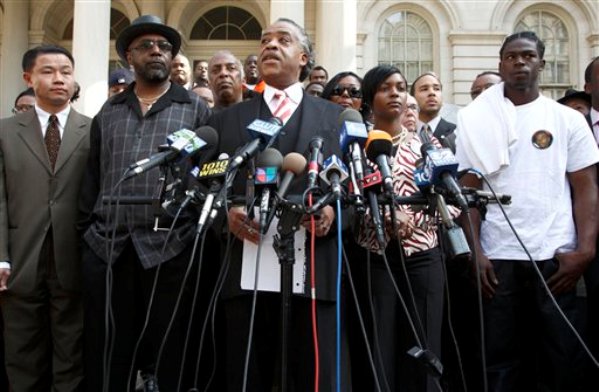 The Reverend Al Sharpton held a press conference on the steps of City Hall today to discuss the Sean Bell shooting trial verdict, which will be announced on Friday. Sharpton said an acquittal would not be justice.

The News reports Sharpton questioned a defense attorney's claim that Bell's friend's "attitude" prompted the police fire, "This smacks of Emmett Till, of reckless eyeballing...Is that now what we're going to bring this city to?How do you justify self-defense against a non-threat?" Sharpton added, per the Observer, "At the approach, the recklessness started...We've always called for peace." 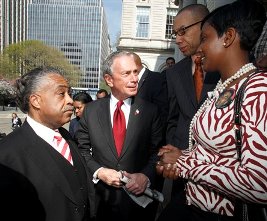 However, some friends and family members are preparing for an acquittal. Bell's father William said during a rally on Monday that if there's an acquittal, he'll ask the federal prosecutors to look at the case. He also said the cops "should think before they react. They didn't think. If they'd have thought, I guess he would be alive today. If they'd thought a little more, a couple of seconds. That's all it took to kill him. A couple of seconds."

Today, Mayor Bloomberg was seen on the steps, talking to Bell's supporters. Yesterday, the Mayor made it clear he wasn't expecting riots, in case of an acquittal, "The public will understand that we are a country and a city of laws...They will accept the judge’s decision. They certainly have a right to talk to the press. They will not do anything that will put anybody else in danger and we will go on and hopefully have learned something from this."

A source told the News that when he announces his verdict on Friday morning, Judge Cooperman will "explain himself first, his feelings about the case. Then he is going to give the verdict."