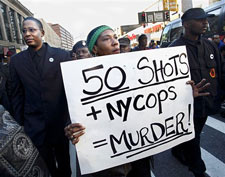 Al Sharpton released the locations and schedule of his civil disobedience capaign, which is supposed to take place next week. The purpose is to maximize public inconvenience, and Al Sharpton decided that it would be more effective to have as many people show up as possible, as well as to let the NYPD where they were going to be in advance. NY1 reports "The goal of the protests is to tie up traffic and force police to make arrests.

Here's the rundown of Wednesday's pray-in protest, which is meant to disrupt civic life as much as possible in order to get the police ot recognize that they can't shoot people without repercussions. Three cops were found not guilty in the shooting of Sean Bell this week. Sharpton says the protests will continue on a weekly basis, leading up to what he hopes will be a citywide shutdown. Places to avoid or appear, depending on one's schedule:

Sharpton's not the only person protesting the Sean Bell verdict. State senator Rev. Ruben Diaz and his son, who is an assemblyman, will be marching from the location of Amadou Diallo's death in the Bronx, to the 43rd Precinct headquarters today.

#al sharpton
#civil disobedience
#diaz
#disruption
#not guilty
#ruben
#sean bell
#verdict
Do you know the scoop? Comment below or Send us a Tip