Sharpton Promises to Shut Down NYC with Protests 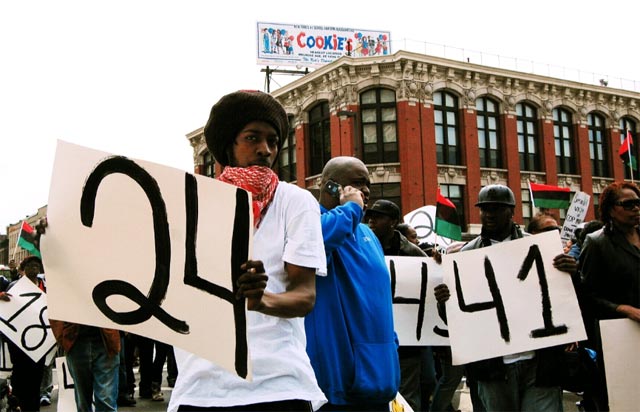 Photograph from yesterday's Sean Bell protest by urbanblitz on Flickr

The Reverend Al Sharpton is planning a series of rallies and acts of civil disobedience in the wake of the acquittals of three police officers involved in the fatal shooting of Sean Bell. Bell, who was a few hours from his wedding, was unarmed when undercover police fired at him 50 times outside a Queens strip club on November 25, 2008.

At yesterday's National Action Network rally, Sharpton said "he was meeting with labor and civil-rights leaders" this week to discuss a day of civil disobedience, "We strategically know how to stop the city so people stand still and realize that you do not have the right to shoot down unarmed, innocent citizens with no probable cause. his city is going to deal with the blood of Sean Bell."

After the rally, protesters marched for 20 blocks, carrying 50 numbered posters--each representing the shots fired. And, today, Sharpton said that Representative John Conyers will meet with Bell's family and visit the site of the shooting. From the Daily News:

"We are going to walk the chairman of the House Judiciary Committee to show him how far the scene of the shooting was from the club.

"It shows that the policeman had 50 different things he could have done in 2-1/2 blocks. If they thought that somebody was going to get a gun, he could have called for backup."

The NY Times has an article about the black community's reaction to the verdicts. Some are giving Mayor Bloomberg credit for being more open.