Sharpton Presses Knicks for an Apology 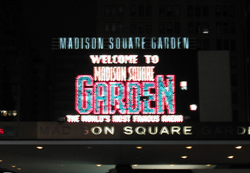 "We are calling on him to apologize because of what came out during the deposition . . . when he said it was all right for black men to call black women 'bitches.'"

The discrimination lawsuit is becoming a neverending headache for the Knicks organization. Sanders was awarded $11.6 million after suing the team when she was fired. Now Sharpton is threatening to boycott Madison Square Garden unless an apology is issued by Thomas. The Knicks have been terrible recently. Last season the team went 33-49, despite one of the highest payrolls in the league. The last time they reached the playoffs was in 2004 when they were swept in the first round by the Nets.

(Welcome to Madison Square Garden, by wallyg at flickr)