The Reverend Al Sharpton organized a rally of about 400 people outside the Suffolk County courthouse to protest the conviction of a black homeower in a white teen's death. They chanted, "Step down, DA, step down, DA" as well as "Free John White! Free John White!"

John White was found guiltyof manslaughter for shooting a teenager, Daniel Cicciaro Jr., in the summer of 2006. White claimed he felt threatened when he saw Cicciaro and other white teenagers surround his house trying to seek revenge on White's son Aaron over a perceived insult. The teens had also allegedly used racial epithets, leading his defense lawyers to describe the scene as a lynch mob. Prosecutors, however, said White could have stayed inside, locked the door, and called the police. 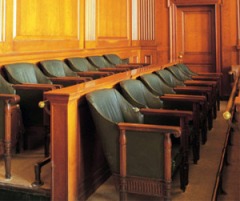 After the verdict was read, two jurors came forward to say they felt pressured, partly by the rest of the jury, partly by the judge who was urging the jury to come to a decision before the holidays, to change their verdicts to guilty. White's lawyers have said they are considering an appeal, suggesting that the teens had created a threatening atmosphere by gathering outside the White home in a "lynch mob."

At the rally, White told the crowd, which was made up of mostly blacks but also included some whites and Hispanics, "There is a road ahead. I don't know what it may bring, yet I know that God will walk with me through the fire." And Sharpton said, "We will raise this to a level of national attention until those young men are brought to justice. Stand up brothers and sisters, don't you back down, rise up for justice, rise up for fairness. We will win because God is on our side!"

Shaprton also added that he would organize protests at the homes of the white teens who threatened the White family: "We won't be drunk and threatening like those kids were. We are going to let the world know where you live."