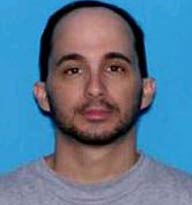 The police are questioning a man who had been registered a room in a West 43rd Street hotel where a woman's body was found on Thursday. Clarence Dean, a 35-year-old "fugitive" sex offender from Alabama, had checked out of the room 608 at the Hotel Carter, an inexpensive hotel near 8th Avenue popular with tourists. He was not charged with any crime, but police picked him up after seeing him at Park Avenue and East 55th Street last night.

The victim, a woman with dirty blond hair in her 20s, was found by a housekeeper who inspected some plastic bags beneath a hotel bed. The ME's office declared the victim's death a homicide and says that she was beaten and strangled. The police are still trying to identify her; the ID she was carrying belong to a woman whose ID was lost or stolen during a trip to NYC last weekend. 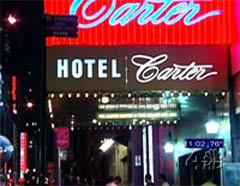 Some sources say that Dean may have met the victim through an online dating service. Dean has an extensive criminal history: He is listed as a sex offender in both Florida and Alabama, he had prior convictions in Texas and Tennessee, was wanted for a January rape (where he met a woman online), and had recently stolen a girlfriend's car and wiped out her bank accounts. The girlfriend told the Daily News that Dean left when she realized he was spying her 17-year-old daughter.

The Hotel Carter has a sordid history, according to the AP: An employee killed a co-worker with a knife and hammer at the front desk in 1999 and a half-naked woman was pushed out of a window in 1997. And that famous incident of Sean Combs and Jennifer Lopez being at a club during a shooting was actually at a club that used to be at the Carter.

#crime
#daily news
#dating
#death
#florida
#hair
#history
#HOMICIDE
#jennifer lopez
#naked
#news
#nyc
#Park avenue
#plastic bags
#police
#rape
#Sean Combs
#sex
#shooting
#texas
#The Hotel
#The ME
Do you know the scoop? Comment below or Send us a Tip
A new Gothamist is coming! We’ve moved comments over to our beta site. Click here to join the conversation and get a preview of our new website.