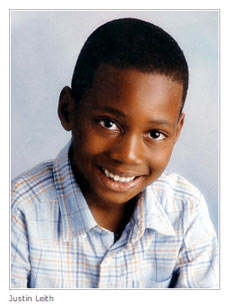 Second grader Justin Leith was found by a student in a restroom at PS 205 in the Bronx just minutes after he was excused from class complaining of a stomach ache. A second grader from a different class found Leith unresponsive on the floor of the bathroom and told his teacher, who alerted emergency services. The seven-year-old could not be revived, however, and was declared dead at St. Barnabas Hospital. There didn't appear to be any signs of trauma to the boy.

The young student reportedly had no prior health conditions and according to his mother passed a physical during the summer with no problems. Parents of other students were initially concerned that Leith was another casualty of the infectious superbug MRSA that killed a 7th grader earlier this week, but health officials ruled that possibility out due to the quick onset of death.

Police also reported to the scene, but no foul play is suspected and an autopsy by the city medical examiner is scheduled for today. Justin Leith grew up in New York City until he was five, when he moved to Atlanta to live with his father. He returned to NYC this summer where he lived with his mother, who described him as a happy and healthy child whose favorite subject was art.

#art
#atlanta
#Barnabas Hospital
#bronx
#city
#death
#health
#hospital
#Medical Examiner
#new york
#new york city
#News: NYC
#nyc
#police
#the city
#this week
Do you know the scoop? Comment below or Send us a Tip
A new Gothamist is coming! We’ve moved comments over to our beta site. Click here to join the conversation and get a preview of our new website.