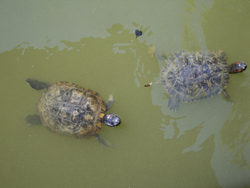 Buddhists looking to increase their spiritual merit by rescuing soup-bound turtles, those turtles' rescuers, and the natural ecosystem of Central Park are all coming into conflict in New York. The New York Sun reported yesterday on the practice of fangsheng, which is a Buddhist practice dating back to the 6th century and involves setting turtles or other animals free and supposedly improves the circumstances of one's rebirth. Unfortunately, the species of turtle most frequently purchased in Chinatown and then released in the East River by Buddhists is the red-eared slider, a type of turtle not fit for survival in the briney New York harbor.

So many turtles are released into the East River that some amateur conservationists have taken to rescuing them along the water's edge. The Sun followed Neal Seigel on one of his daily walks along the river between the Brooklyn and Manhattan Bridges. He collects turtles in distress he finds and nurses them back to health before setting them free in Turtle Pond in Central Park. A gardener for the park says that the red-eared sliders are beginning to be a problem due to the number of them in the pond.

This practice, and the fact that other New Yorkers may be getting rid of pet turtles in Central Park, has led to a proliferation of red-eared sliders, according to Maria Hernandez, the gardener in charge of the pond.

"They are basically a problem because there is so many of them," Mr. Hernandez said. "We try and discourage it because it is not a native species."

Some Buddhist temples are encouraging their members to make monetary donations to environmental and animal welfare organizations rather than releasing turtles and other species in habitats where they probably won't thrive or could possibly harm the ecosystem.

After holding an initial hearing, Democrats and Republicans will be back in court in Saratoga County next week.

By
Jon Campbell
and
Brigid Bergin