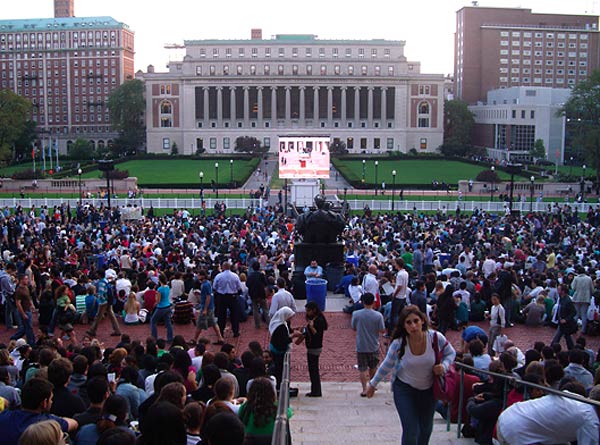 Photograph from the Low Library steps from Bwog

We're at Columbia University for the ServiceNation Summit. Security is tight--university entrances are closed to students and Columbia employees only--and students are sitting outside to watch a livefeed of the forum in the middle of campus. The forum with Barack Obama and John McCain will air at 8 p.m. on CNN, MSNBC, and some PBS stations. You can also watch it online at the ServiceNation website.

The purpose of the event is, by way of leaders and citizens, to "create a new era of service and civic engagement in America, an era in which all Americans will work together to try and solve our greatest and most persistent societal challenges." ServiceNation is organizing a Day of Action on September 27, hoping to encourage people across the country to commit to community service.

Governor Paterson greets the crowd. He recounts how he was at East 68th Street and Lexington and asked an elegant woman if there was a drug store across the street. She said yes and took him across the street to the drug store. Once there, Paterson didn't go inside and the woman asked why--he said that his friend said his office was across the street from from a drug store. The woman was aghast, but he told her he appreciated her and "applaud[ed] her service."

Paterson announces that he's created a cabinet position for national and community service. Susan Stern will be the Chair of the State Commission on National and Community Service. Stern is the immediate past Chairman of the Board of UJA-Federation of New York and will "produce a report for the administration within 90 days to make New York State a national leader for service and volunteerism."

He mentions how Obama and McCain have served their community and country and also acknowledged how seven years, NY State witnessed one of the greatest acts of service on September 11, with first responders rushing into the World Trade Center.

7:39p.m.: Tobey Maguire comes out to pay tribute to the "real heroes"--police officers, fire fighters, teachers. He says it's exciting because the next president of America is there, though "we don't know which one it will be." He predicts a record turnout during the election because of genuine excitement, "but we can't go back to cruise control" after the election and must keep focused on contributing to the community.

7:43p.m.: Two family members of September 11 victims speak. Elizabeth Alderman, whose son Peter C. Alderman was killed on September 11, discusses the Peter C. Alderman Foundation. Pointing out that "one billion people, a sixth of the world’s population, have directly experienced torture, terrorism or mass violence through civil war, ethnic cleansing or genocide," the foundation seeks to rehabilitate victims of violence through healthcare. The foundation has built clinics and treated 55,000 victims.

Jay Winuk, whose brother, a volunteer firefighter and trained EMT, died on September 11 when he raced to the WTC to help, is one of the founders of MyGoodDeed. The non-profit organizes community service projects and hopes to make September 11 a national day of service.

7:54 p.m.: Live feed to press filling room goes out. We think Time's John Huey was speaking. It's apparently a break.

8:01 p.m.: Richard Stengel of Time and Judy Woodruff of PBS are about to introduce either McCain or Obama. The audience is very happy. The sponsors are AARP, Target, Time Magazine, and the Carnegie Cooperation.

Camera seemed to flash to Leonardo DiCaprio in the audience. 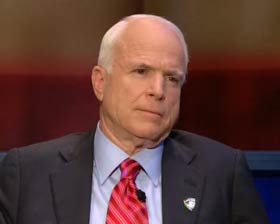 John McCain is introduced first and he gets a warm welcome. Woodruff refers to how he was at Ground Zero earlier today and asked how the country should commemorate September 11. McCain says people should serve their country. Stengel asks what he would have done to tell Americans to do, besides go shopping, after 9/11. He says he would have created organizations, from helping neighborhoods to securing nuclear power plants. He also says he would have expanded the military.

McCain now talks about how the country is unhappy with the way the government is leading them and says it's an opportunity to lead the country and reform the government and asks citizens for service. Woodruff asks if service should be compulsory, and McCain says no, it's contradictory and people won't want to serve. He talks about America being ready to be inspired.

Basically, his answers about service become mini-stump speeches about how he's all about change and knows how to fix Washington. Time for a break.

8:16 p.m.: Stengel brings up Katrina and how it spurred the largest volunteer movement. He asks McCain what the role of government is. McCain says that it's to help its citizens in times of needs... later segues to how faith-based organizations do a great job too and that (government) partnerships with places with FedEx are critical, too.

Woodruff suggests that many people who are wealthy have the flexibility to volunteer. McCain disagrees, says many average Americans are the first to respond. Stengel asks if he would encourage companies to give paid leave to employees who volunteer. McCain says he wouldn't force them, he'd commend them, though.

On how a McCain has served in every American conflict: McCain reiterates how what he went through made him realize he belongs to his country. "It's not about the individual, it's about the cause we serve." Woodruff brings up low recruiting numbers and how most recruits are coming from lower income communities and asks if the social imbalance in the military needs to be addressed. McCain says it was worse during the Vietnam war, the military is too small and needs to be expanded and says more incentives need to be offered. McCain says that while he's proud his daughter graduated Columbia, he points out ROTC isn't allowed on campus and says colleges students should be exposed.

Stengel asks about military, but McCain says servicing can be in other ways, like Americorps and PeaceCorps. Woodruff notes how Obama's service plan has a $3.5 billion price tag and asks if he would spend as much. McCain said he would spend money but it wouldn't be the first thing he does. He also says it doesn't have to be run by the government, citing faith-based organizations.

Ooh, Woodruff asks McCain about Palin's remarks denigrating community organizers. McCain blames Obama for not agreeing to town halls (keep mind they have agreed to debates) and says that Palin was speaking out because her experience as a mayor was being attacked. McCain says small-town mayors have difficult jobs. He says this partisanship should be put aside...at least for today.

McCain says that older people can contribute to the service effort. An online questions related to the terrible economy gets a government-needs-to-change response. Interesting: He says he'd try to keep foreign-born nationals getting a Ph.D. in the country here (Stengel asks if he'd give them green cards, McCain says it wouldn't automatic).

McCain believes in "American exceptionalism," that Americans believe everyone is equal.

Stengel points out that McCain has said he wanted to have a clean campaign, but the election has gotten dirty--so why would people want to go into service? McCain credits Obama with inspiring people in being interested in the election and says his own record will probably mean a high voter turnout. He reiterates the charge for Obama to appear at town halls. 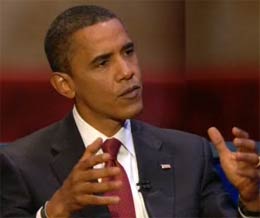 8:56 p.m.: Obama notes how he's back at his alma mater, but the neighborhood has changed a lot. "When I came in 1980, I could afford the rents..I don't know about now." Stengel jokes about faculty housing.

Stengel asks what Obama was doing on 9/11. Obama was in Chicago--at the State Legislature. He recalls being cleared out of building and watching coverage. It was a terrible time, but it was also a time when the country came together and partisanship went away. So the question is how to recreate that feeling and honor the people who died everyday--how does it reflect itself in our lives? Obama believes the country is hungry for it, but there hasn't been a president or White House to tap into. So on that point, he and McCain agree.

Post 9/11, he says he would reduce dependence on foreign oil --- huge cheer from the crowd -- and asks citizens to pitch in and look at more fuel efficiency. Tap into the desire for volunteerism with first responders, service in the community or military...

Stengel asks about the responsibilities of citizenship. Obama says that America is not a gift--though it's a blessing--but there are responsibilities, neighborliness, a commitment that extends beyond one's own self-interest. He wants to restore common responsibility. And how? He says Americans should start early--high school, college students volunteer in exchange for affordable education.

On how President Clinton's service plan--Americorps-- was re-tailored when passed, Obama says he doesn't expect his service plan to be passed exactly as its written, but he's sure that the country wants to be part of the solution and will do that with service. He also said, "I think the times have changed since 1992."

Obama says "We have to have a FEMA that works." He says a president need to get outside himself to purse these opportunities and he believes he can do it.

On how junior officers are leaving their duty in Afghanistan in large numbers, Obama discusses the how the GI Bill helped his grandfather, how the GI bill meant the government would stand by its military.

Stengel says Columbia invited Mohammed Ahmadenijad last fall but doesn't allow ROTC here. Obama says ROTC should come on campus and that it's a mistake that students aren't given the opportunity to learn more about the service.

Stengel asks about Obama about how he reportedly was interested in serving in the military. Obama wants to encourage people to serve. Obama brings up how he would have a Veterans Corps to help veterans get back to civilian society.

Online question: How possible would it be to get military service style benefits for non-military service work? Obama says that if the work is in harmful areas--like in Afghanistan--it should be considered. "We have a special obligation to those who are risking life and limb." He brings up how the country also needs math and science teachers, and that those people willing to teach in underserved parts of the country should be helped.

9:30 p.m.: Asked whether he'd bring McCain into his cabinet as secretary of service, Obama said sure, if that's the deal...but as for serving in McCain's cabinet, "We've got a lot of work to do first." Obama pays tribute to McCain's legendary record.

Obama recounts a story about a man in Montana whose friend, a National Guardsman who returned, committed suicide. Struck by this, the man started a group about post-traumatic stress disorder treatment group, and now Montana has the best PTSD treatment for National Guard members. The point: IT's not about being partisan, it's about doing something.

Stengel asks about Palin's community organizer remark and whether Obama belittled her small-town mayor experience. Obama points out that there were many small town mayors at the DNC. And he was surprised by her remarks-he had extraordinary experience as a community organizer. It was even better than Columbia!

Obama reiterates how his campaign has always been about change. He points out how the government has given us the highway system and parks--he wants to make the presidency cool again. He wants citizens to hold their elected officials accountable.