Seriously: Why Does America Care Who Donald Trump Is Endorsing For President?

According to numerous reports, combover raconteur and enormous balled shepherd Donald Trump will announce who he is endorsing for president today in Las Vegas, two days before the Nevada caucuses. Initial reports indicated Trump would side with good pal Newt Gingrich, who stood by Trump during that whole Donald Trump's Very Classy GOP Presidential Primary Debate: The Debatening fiasco in December. But now CNN reports Trump will back Romney. Our one and only question: why does America give a shit who Donald Trump endorses?

Perhaps Gingrich hit the nail on the head when asked by the AP yesterday about Trump possible endorsing him. "He is always interesting," Gingrich said of Trump. "And I don't know of anybody who does a better job of getting attention by announcing that he will presently announce something." Trump is a self-contained universe unto himself, an engorged ego living a hermetically sealed existence. What he lacks of an inner life he fills with "yards and yards of gold silk"—and he makes his money from attention these days, from the press he stirs up which then gets channeled back into his reality show, the most profitable piece of the Trump empire.

Trump has previously been effervescent with his praise for Gingrich: "He's got great ideas. He's very smart, he's very tough and he is a great debater," he said last Sunday on "Meet The Press." But Trump has also said he "likes" both candidates. And here's the most important point, and why we're positive the reports that he's supporting Romney are true: Trump can't afford to lose attention. So backing Romney, the all-but-triumphant candidate, is his only choice, despite the fact Romney quietly backed out of the room when Trump invited him to his debate. Oh, and also despite the fact that Trump has previously slammed Romney for being a "small business guy" who "got rid of jobs."

So Donald Trump is going to endorse either Romney or Gingrich today—most likely Romney—unless he pulls a Herman Cain and endorses "the American people." The only reason we still care is because we not-so-secretly hope Trump pulls a wildcard and endorses himself—the prospect of Trump joining the likes of Ross Perot, Kinky Friedman, and John Tyler, and fake-running for president as an independent, would make up for the fact that we'll never have a gold-encrusted grave to rest in for eternity.

Update: Check out the Daily News' frontpage headline on Trump: 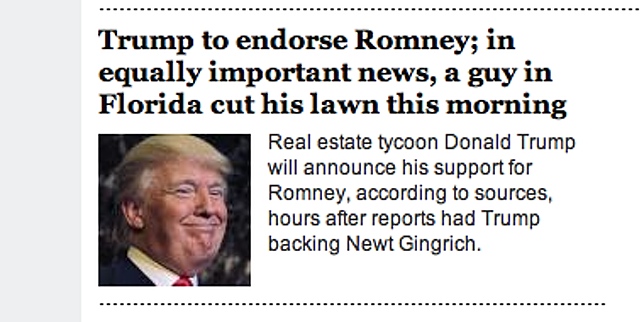 #2012 election
#donald trump
#election 2012
#endorsement
#mitt romney
#newt gingrich
#president
Do you know the scoop? Comment below or Send us a Tip