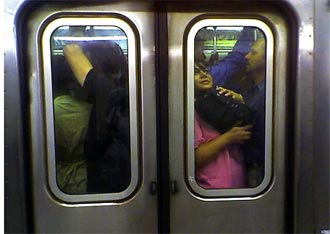 A man who repeated assaulted women on subway trains was arrested yesterday. The Daily News reports that while Freddie Johnson has a 57-page rap sheet and was only out of jail for 15 days (for prior sexual offenses--he was even wearing his electronic monitoring anklet!), he still decided to molest a Hunter College freshman on the 6 train.

Johnson, per the Post, rubbed "his genitals against a horrified woman" during yesterday's morning rush hour. Undercover police, who had been notified of Johnson's release by the parole board and were given a photograph of him, saw him at the 28th Street station.

They then followed him onto a train where they saw him molest Nicole Amaya and eventually arrested him at the 59th Street station. NYPD Transit Bureau commanding officer Chief James Hall explained, "Given his history, we thought it would be good to keep an eye on him to see if he goes back to his old ways, which he did."

Amaya told the News, "I was in complete shock and I was really scared...I hope he's locked away for a long time." That seems likely--29 of his past 53 offenses are sexual offenses on the subway. And one female straphanger lamented, "The train is very crowded and you don't notice if someone is rubbing against you inappropriately." And female police officers have gone undercover to nab subway perverts before in Operation Exposure.

#nypd
#pervert
#serial subway pervert
#subway
#subway pervert
#transit bureau
#undercover police
Do you know the scoop? Comment below or Send us a Tip
A new Gothamist is coming! We’ve moved comments over to our beta site. Click here to join the conversation and get a preview of our new website.