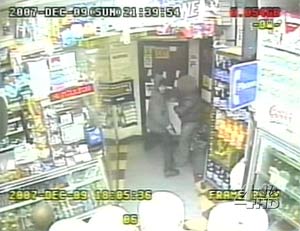 A series of bodega robberies in the Bronx has police anxious to arrest the perpetrators. Yesterday, cops released surveillance footage from a Sunday robbery on St. Ann's Avenue, hoping the public will be able to identify the men in the video. Police believe the same robbers hit a store last night and shot a man in the face and torso.

According to WNBC, the video shows a robber rushing behind the counter, pointing a gun at a worker, "who immediately cowered into the corner as the robber rifled through the cash drawer...When the robbery began, a customer inside tried to flee through the front door but was kept inside by one of the robbers."

Since last Monday, the robbers have hit at least seven businesses. The suspects are men, one about "5 feet 8 inches with a heavy build, a goatee and wearing a baseball style cap with a dark hooded sweatshirt" and the other is "5 feet 10 inches tall with a gray hooded sweatshirt."