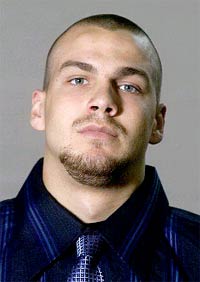 Yesterday, the federal government formally asked the Serbia to extradite Miladin Kovacevic, who is charged with beating a fellow Binghamton University student into a coma. The U.S. ambassador met with Serbian officials in Belgrade, and now the Serbian government is "moving with laser beam speed," a Daily News source says.

Kovacevic, a 6'9" 260-pound basketball player, allegedly beat up 5'6" and 135-pound Bryan Steinhauer in early May after Kovacevic's friends thought Steinhauer might have groped one of their girlfriends. Though Kovacevic (as well as two others) was charged with felonies for assault and gang assault and was held on $100,000 cash bail and had to give up his passport, Serbian deputy consul Ignor Milosevic posted the bail and provided an emergency passport, allowing Kovacevic to leave the country. This sparked outrage from officials like Senator Charles Schumer as well as Steinhauer's family in Brooklyn.

The Post reports that Kovacevic's father has "powerful allies" in the government. Peter Kovacevic, who had served as an army surgeon in the 1990s and is also described as a supporter of Slobodan Milocevic, had told the Post last week, "All around the world, they spread the lies that the Serbs only care about themselves. This is simply not the case. There is a worldwide conspiracy against Serbia and they are always showing us in a bad light."

#binghamton university
#bryan steinhauer
#Miladin Kovacevic
#senator schumer
#serbia
#Serbian Consulate
Do you know the scoop? Comment below or Send us a Tip