Cecilia Carey is stronger than John Boehner. The self-described 76-year-old "super senior" was told a few months ago she'd have to move out of the one bedroom apartment in Kips Bay into a studio or see her rent double. The reason: the city's Department of Preservation and Housing has a $35 million shortfall because Republicans in Congress continue to starve the federal government with spending cuts and sequestration. HPD no longer had the money to fund the Section 8 voucher for Carey's one-bedroom. She has lived there 20 years, but now Carey was deemed "overhoused."

"When my grown sons visit, where are they supposed to stay?" Carey wonders, imagining a jumble of limbs in what HPD refers to as a "0 bedroom" unit. She scoffs at the idea of opening up a murphy bed or a pull-out couch every night. "I'm too old for all that," she says, adding that she contacted HPD to ask to stay where she is. She has not gotten an answer. "I don't want to move. I'm not going to move out if I can help it."

New York City's Section 8 tenants live in privately owned buildings and pay one-third of their income as rent, while the rest is paid for through vouchers provided by the federal government. The income limit for a single person receiving Section 8 assistance is under $30K but the average income is around $15K. Tenants pay an average share of $436 a month, and more than 40% of voucher holders are disabled. As federal funding for the affordable housing program continues to shrink, New York City has closed the waiting list for Section 8 applications. There are still 123,000 applicants waiting for a chance at a voucher.

Faced with impending reality of $35 million in cuts and a recalcitrant Congress, HPD issued letters notifying residents that they were "overhoused" this summer.

"The federal sequester imposes relentless and draconian budget cuts that hurt our most vulnerable citizens by placing immense fiscal constraints on municipal agencies such as HPD," former HPD Commissioner Mathew Wambua wrote to New York's Democratic Congressional delegation in a letter last month. "As a municipal agency we must deal with the budget we are given, and have done all we can to keep our most vulnerable citizens housed in the face of these crippling congressional budget cuts."

Without the downsizing, HPD estimates that 2,900 families might have their vouchers rescinded. And as many as 3,300 families could be impacted if the sequester budget cuts remain unchanged through 2014.

While some of the recipients were single individuals who had been living in 3 bedroom apartments for several years, others were elderly or disabled, and had lived in their home for decades. A single tenant in a one-bedroom paying $500/month could see their rent jump to $2,000 if they refused to move to a "0 bedroom" unit.

"These people are my friends, some of them are over 80 years old and they're being told to leave," says Rita Popper, a resident of Manhattan's Knickerbocker Plaza who helped organize the Housing Coalition Against Downsizing, a group of Section 8 tenant leaders from across five boroughs who are fighting to ensure that the elderly and disabled aren't being disproportionately impacted by HPD's actions. 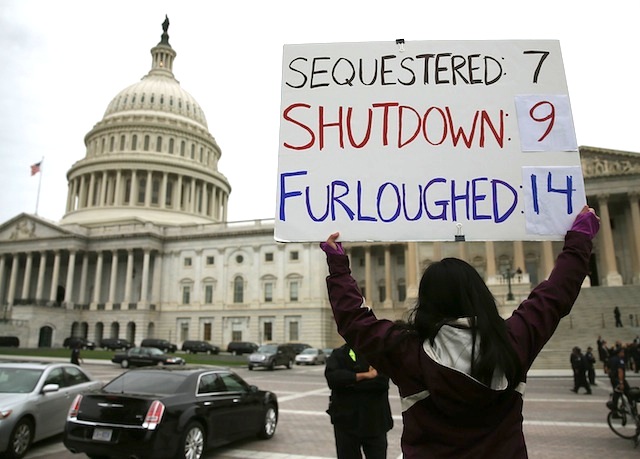 A women holds a sign during a rally in front of the U.S. Capitol yesterday reflecting the number of days the government has been shut down, sequestered, and furloughed (Getty Images)

"Downsizing for seniors and disabled people is wrongminded, unfair, and should not be occurring," Norman Siegel, an attorney for the group says. "The federal Department of Housing and Urban development suggested numerous different ways for HPD to sustain these cuts, and downsizing was only one of them. I'm 70 now, and thank God my health is OK, but I just think it's horrible to be forced to spend your golden years in a studio—you have your whole life in your home and now you have to pack it away and move?"

At the Knickerbocker Plaza's senior center last week, Siegel met with more than a dozen of the coalition members to discuss strategy. The first goal is to determine whether the elderly—defined by HPD as residents who are 62 and older—and the disabled are being disproportionally impacted. If so, it could result in a lawsuit under New York's human rights laws.

HPD says that there is a "process to request a reasonable accommodation," that requires a physician's recommendation, but there are few other details on whether exceptions would be made for age or disability. Siegel, members of the coalition, and staff members of state, local, and Democratic Congressional representatives will meet with HPD in the coming weeks to discuss the downsizing.

GOP Rep. Michael Grimm, whose Staten Island and Brooklyn district contains more than 500 units of Section 8 housing, sided with other Republicans to force the government shutdown. His office did not respond to requests for comment.

A rally was planned for the afternoon of October 19th on 91st Street between 2nd and 3rd Avenues. In the meantime, residents said they felt HPD's pressure to relocate was growing.

"Our people have a lot of fear, HPD intimidates us a lot," Joan Dacres, a lifelong resident of Brooklyn's Tivoli Towers told the group. "You can't say anything without getting a lecture on fraud. You really don't have anyone to talk to, you feel as if you don't have any choices." Dacres said she was at the meeting representing her mother, 80-year-old Claudette, who has health issues and was asked to move from the 3-bedroom she has lived in since 1973 to a one-bedroom in a different neighborhod. "I was like, Mom, at least it's not a studio, let's try for something better."

One of Cecilia Carey's neighbors attended the meeting and agreed that HPD was prone to giving residents the cold shoulder, or worse. "They're harassed by HPD or they're taken to court for fraud or some other thing," said the resident, who declined to be named for fear of reprisal. "The older people get, the less angry they become, and the more fearful they are. They don't want to leave their homes."

#affordable housing
#HPD
#john boehner
#republicans
#section 8 housing
#sequestration
#original
Do you know the scoop? Comment below or Send us a Tip