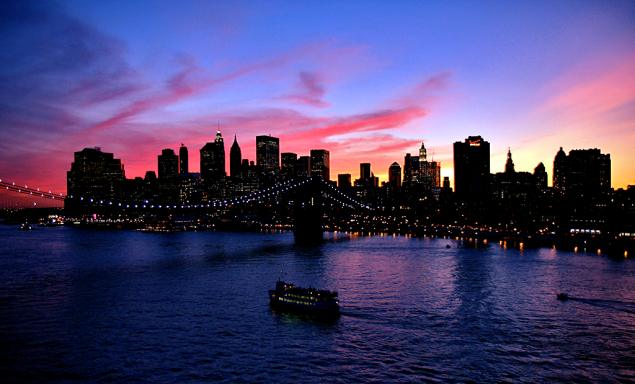 from Manhattan of Manhattan by michaeldillingham on Flickr
Almost half an inch of rain fell during yesterday's dramatic thunderstorms. The weather today and tomorrow won't be nearly as dramatic. Mostly clear skies, with a few non-threatening cumulus, and slightly cooler than normal temperatures should be the rule until Friday. We can expect a high in the mid to low 70s on both days. Tonight's low should drop to the 50s in the city and possibly into the 40s on eastern Long Island.

A slow moving frontal system will bring clouds and drizzle to the area on Friday. Saturday and Sunday are expected to be warmer, with highs around 80, but it is looking like that warmth will be accompanied by a sprinkly, drizzly, dreary, cloudy mix the entire weekend and on into early next week. Sunday may be the wettest day, with a chance of showers or a thunderstorm, that will hopefully not put a damper on Pickle Day festivities.

While the New York weather is rather dull, the same can not be said for the Gulf of Mexico. Hurricane Ike has crossed over Cuba and is now regaining strength over the warm waters of the Gulf. The hurricane is expected to intensify into a category 3 storm, winds at least 111 mph, by tomorrow night. The current projected path has Ike making landfall as a category 3 storm just north of Corpus Christi late Friday night.

#cool
#dreary drizzly weekend
#Hurricane Ike
#sunny
#weather
Do you know the scoop? Comment below or Send us a Tip
A new Gothamist is coming! We’ve moved comments over to our beta site. Click here to join the conversation and get a preview of our new website.