Separation of Santeria Rituals and State 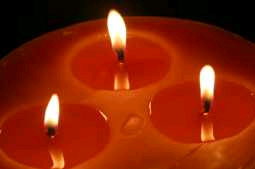 It is near impossible for the Department of Education to fire a teacher easily, but when it comes to a principal allegedly using chicken blood in a Santeria ritual to cleanse her high school, that's another story. The DOE says it will reassign and later fire Matritz Tamayo, the principal of the Unity Center for Urban Technologies, a Manhattan high school in Soho, for coercing staff members to participate and help pay for a number of Santeria rituals.

The Post sums it up thusly: Tamayo turned the school into a "Hogwarts wannabe with a campaign of magical Santeria rites, which included white robes, mystic headdresses, splattered chicken blood, burning incense and tarot cards." Tamayo was desperate to improve the behavior of students, perhaps taking other teachers' running joke of burning sage to cleanse the building too seriously.

Former assistant principal Melody Crooks-Simpson "told investigators she didn't attend that ceremony but showed up to school a few days later in a white dress to participate in another ceremony because Tamayo said it wouldn't work without her." In fact, Crooks-Simpson was so integral to the ceremony that Tamayo asked her to pay $900 to defray costs! Tamayo also allegedly had Fonte drive students to off-site Regents tests in Fonte's private car - paying her $250 of school money and asking teachers to contribute an additional $100.

DOE head of investigations Richard Condon said that his recommendation to fire Tamayo was not about Santeria rituals being different, "Had she hired a priest to sprinkle holy water on the building, and she coerced the assistant principal into paying for it and attending it, I would have a problem with it."

Tamayo denies the charges and says that some of her office accessories, a head with pins and a cloth doll, were just a interior design project and a gift - not Santeria-related. She thinks the union rep is out to get her. Apparently the rep didn't like the smell of incense in Tamayo's office; the accused principal told the Post that the rep told her, "I'm going to retire in September, and I'm going to go out with a bang."