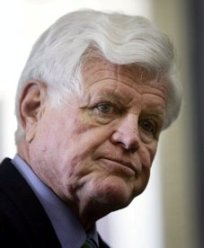 Doctors for Senator Edward Kennedy tell the AP the 76-year-old has a malignant brain tumor. He had suffered a seizure on Saturday, and the tumor was discovered when the doctors performed tests and is believed to be the cause of the seizure.

His family rushed to his side at the Massachusetts General over the weekend, including niece Caroline Kennedy. The Senator and Caroline Kennedy notably threw their support behind Barack Obama's presidential nomination bid in January.

More recently, Senator Kennedy, who is the second-longest serving member of the Senate, has slammed Hillary Clinton, shooting down the idea of an Obama-Clinton ticket, "I think if we had real leadership - as we do with Barack Obama - in the number-two spot as well, it'd be enormously helpful."

According to the AP, survival depends on how aggressive the cancer is--it can be as long as five years or as short as one year. It's unclear what his course of treatment will be; full statement from the doctors, via Politico, after the jump:

Over the course of the last several days, we've done a series of tests on Senator Kennedy to determine the cause of his seizure. He has had no further seizures, remains in good overall condition, and is up and walking around the hospital. Some of the tests we had performed were inconclusive, particularly in light of the fact that the Senator had severe narrowing of the left carotid artery and underwent surgery just 6 months ago. However, preliminary results from a biopsy of the brain identified the cause of the seizure as a malignant glioma in the left parietal lobe. The usual course of treatment includes combinations of various forms of radiation and chemotherapy. Decisions regarding the best course of treatment for Senator Kennedy will be determined after further testing and analysis. Senator Kennedy will remain at Massachusetts General Hospital for the next couple of days according to routine protocol. He remains in good spirits and full of energy.

If you want to send Senator Kennedy well wishes, you can do so on his website.