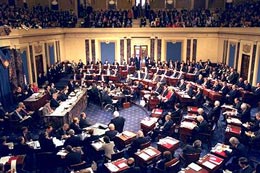 The Senate will vote on the $700 billion bailout plan (or the Economic Rescue Plan, as the White House calls it) tomorrow. The NY Times, which described it as a "surprise move," reports that Senate majority leader Harry Reid (D-Nevada) said, "It has been determined, in our judgment, this is the best thing to move forward. This is good for the country.”

The package will reportedly have "new provisions-including raising the FDIC insurance cap to $250,000 from $100,000." Senator Barack Obama mentioned the idea early this morning and Senator John McCain also endorsed it; FDIC's chairwoman also supports a temporary increase, according to the Wall Street Journal.

Interestingly, after the House failed to pass the bill on Monday, the previously angry calls to lawmakers about the bill became angry calls wondering why they didn't take any action--Rep. Steven LaTourette (R-Ohio) said, "I started hearing from a lot of people who lost money on their investments thanks to the big drop on Wall Street yesterday." However, the Washington Post said House Speaker Nancy Pelosi "responded tepidly" to the Senate decision, "The Senate has made a decision about how to proceed and what can pass that body. The Senate will vote... and the Congress will work its will."

#bailout
#Congress
#economy
#senate
Do you know the scoop? Comment below or Send us a Tip

One runner dead is dead, more injured at Brooklyn Half Marathon
Michelle Bocanegra